Monopoly: Root of All Evil

The Monopoly game originally had an anti-monopoly, pro-cooperation (not corporation, COOPeration!) version. Somebody should revive it, along with the understanding of the game as a warning of horrific evils, not just arcane Wall Street issues, and not just an opportunity to inculcate greed or generate fun family arguments. 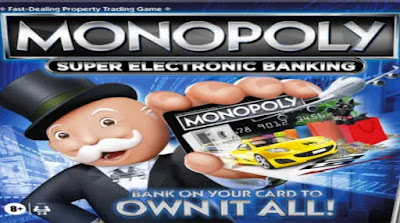 “Horrific evils”? Can I be serious? I’m afraid so. Pick up a copy of Thom Hartmann’s The Hidden History of Monopolies: How Big Business Destroyed the American Dream.

The United States has a lower life expectancy, higher suicide rate, greater gun violence, less safe workplaces, fewer hospitals, greater lack of healthcare, greater debt, less education, more corrupt politics, more limited and propagandistic media, lower wages, fewer rights in the workplace, more environmental destruction, greater poverty, and 40% of the people in one of the wealthiest nations on earth struggling just to survive because of monopoly — not the game, but the fascistic economic practice. “Environmental destruction” is a rather big item in that list, because it threatens human survival. Yes, “fascistic” — more on that below.

The average U.S. family pays a $5,000 annual monopoly tax. That is the extra amount of money that basic services cost as compared with what they cost in similar nations that don’t allow the same concentration of corporate power. Internet costs more. Medicines cost more. Energy costs more. Water costs more. And the corporations that impose these higher fees control the government that allows them to do so, that allows them to pay no taxes, and that allows them to dominate major media and education so that people don’t quite catch on to what’s happening. The monopoly tax is above and beyond the basic lack of public services, the need to pay for college, the need to pay for healthcare, the need to save for retirement, etc., in other words the minimal return on actual taxes.

One of the most firmly planted myths in U.S. “history” is that the Boston Tea Party was a revolt against Big-Guvment Socialistic Taxes. Hartmann explains that a larger factor than resentment of taxes was resentment of tax cuts for the world’s largest corporation, the British East India Company, which was given a monopoly over much of the trade by the colonies. This corporation’s stock was largely owned by the British royal family and top officials. It lobbied Parliament to ban the manufacture of many products in the colonies (such as clothing — which is why there were Gandhian campaigns to manufacture clothing before the U.S. revolution was perverted into violence, and long before Gandhi came around — see Resistance, Politics, and the American Struggle for Independence, 1765-1775, by Gene Sharp and David Toscano). Only this one corporation could sell tea wholesale in the colonies. In 1773, the British East India Company, breaking ground for Amazon and ExxonMobil, was given a larger monopoly and the right to pay no taxes on tea sold in the colonies. Smaller tea dealers went the way of Wal-Mart towns. This created the rage that led to dumping the tea into Boston Harbor — a mass-organized Occupyesque open-mic small-d democratic campaign not controlled by Sam Adams or any other leader — see Founding Myths: Stories That Hide Our Patriotic Past by Ray Raphael.

Hartmann’s hero, my slave-owning imperialist genocidal neighbor, Tom Jefferson had a decent understanding of the dangers. Restrictions on monopolies was the one thing he wanted in the Bill of Rights that didn’t make it in there. Mickey Mouse has had a more mickeymousian understanding, and copyrights have been stretched and stretched to suit him and Disney. In 1790 copyrights were 14 years, with a possible 14-year renewal if an actual homo sapiens responsible for the creation was still alive. These numbers were doubled in 1831 and 1909 to 28 plus 28. In 1984, before Mickey could expire, Congress upped it to a creator’s lifetime plus 50 and allowing non-human corporations to renew copyrights for 75 years. In 1998 Congress made corporate owned copyrights 95 years from first publication or 120 from creation. Mickey now has until 2023, and Hartmann predicts a new law will soon extend that.

States used to put corporations out of our misery if they didn’t behave ethically and responsibly, as well as if they stifled competition. In the 1880s, when Ohio threated to end Standard Oil Trust of Ohio (that is, bust it up and sell it off — a notion that sounds crazy to Fox News viewers but is not actually as crazy as anything Jeff Bezos will be allowed to do today), Rockefeller gathered up his toys and moved them to New Jersey which obligingly allowed unlimited corporate size and lifetime and the possibility for corporations to own stock in other corporations. Standard Oil of New Jersey went on to fund and arm Nazis and beautify the Gulf of Mexico. Delaware (the traditional name of Joe Bidenville) soon surpassed New Jersey in corporate lawlessness and now dominates the other 49 states as headquarters of destructive enterprises, but the other states evolved as well — all 50 of them giving corporations unlimited lifespans, unlimited size, and general immunity from public oversight.

FDR made speeches that could be swapped out for Bernie Sanders speeches, with only the numbers less severe, about the concentration of wealth and power. Only, FDR called the problem “fascism,” a “cartel system,” and “European style” governance, even while allowing too-big-to-fail corporations to dominate U.S. policies and fund U.S. enemies. The Harding-Coolidge-Hoover years had pushed “deregulation,” small guvmint, and a Great Depression. But the big leap forward for the jack-booted job-creators came with the election of Ronald Reagan. Dreams of shrinking work hours, and of income keeping pace with productivity evaporated as anti-trust laws were abandoned and top tax rates were slashed and (not even Hartmann will mention this but) government wasn’t shrunk, it was militarized; the money was moved from non-military to military spending.

This is my one complaint, not with Hartmann’s book, but with the entire culture of the United States. The size of the government has not been shrinking. Yet we get wonderfully well-informed books telling us it has been, because all the things we’re told cost money have been shrinking. Yet that one item that makes up OVER HALF of federal discretionary spending has been swallowing up all the money taken out of everything else. If there are any benefits to a smaller government, pure and simple, we wouldn’t know it; we haven’t tried it. If there are any benefits to prolonging the endless misguided debate between big and small government, they must all be benefits to the weapons dealers, because I haven’t seen them.

Hartmann distinguishes bad monopolies from “natural” ones. He doesn’t want a government-made car, but does think houses with only one power line and water line and sewer line should have those monopolies controlled by the government, because it tends to do a better job than private corporations. The same is true for healthcare, of course. And handing these “natural” monopolies over to corporations creates so much abuse that the government then has to fund regulatory agencies to oversee the criminals it has empowered.

Hartmann wants to re-criminalize bribery, separate cable from phone from internet, recreate public responsibilities for mass media, bring back the corporate death penalty, regulate Facebook, ban the preemption of local laws by states and of state laws by the feds, overturn Taft-Hartley, and uphold the right to organize.

But what about the domination of government by the mega-weapons dealers who suck down the bulk of the corporate welfare yet receive minimal attention? Are they a natural or unnatural monopoly? For those of us who see no justification for their existence at all, I suppose “unnatural” is the obvious choice. For those who support military spending within some sort of limits, there still does not seem to be any analogy to a single water or sewer line. Missiles and napalm and cluster bombs can arrive from all points on the compass simultaneously. If banks and search engines and pharmaceutical companies need busting up, what possible excuse is there for the current existence of Lockheed-Martin?