Rapid Fire (UK edition): Send in the Clowns; BoJo in Whiteface; a Glimmer of Hope

In Covid Time, the UK government has become an endless freak show of third-rate goobers and bug-eyed extremists trying to hide their actual, unconscionable strategy – "Do as close to nothing as we can get away with and let the pandemic 'cull the herd'" – behind a series of threadbare obfuscations which they don't even try to pretend are true. 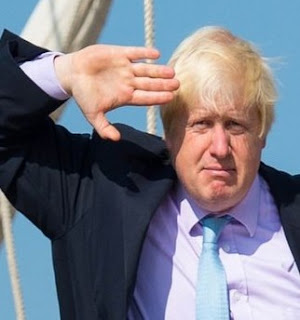 You often hear people declaim in outraged wonder, "They simply *can't* be as stupid as they seem, can they?" My response used to be a shrug and a cynical chuckle, "Oh, yes, they can, and they are!" But I don't really believe that anymore.

1. Feigned Incompetence as a Cover for an Agenda of Extremist Evil
(Williamson can hardly fiddle the science when he can't count to two)


I don't believe their actions in the pandemic are due largely to stupidity or incompetence. I think, by and large, the people in the government today are acting with studied deliberation to advance the morally depraved agenda they have pursued (often openly) throughout their lives: to destroy the very notion of a greater common good and impose the rule of unaccountable elites.

To do so, they act ruthlessly and continually – and above all, with knowing, deliberate deceit – to degrade and undermine any institution or entity that might offer even the slightest opposition or alternative to their extremist ideology. This includes, most emphatically, the idea of government itself, as a vehicle for enhancing and enriching the lives of ordinary citizens. (In this, of course, they are simply copying – like the witless little toadies they are – their masters on the American rightwing.)

Like their masters, they believe – and have said so, over and over, for years and years – that the only legitimate function of government is to promote the profit and power of the privileged few. They will claim that they believe this blinkered, stunted ideology will produce a better result for the common folk in the long run – but this claim is just another example of their strategy of deceit. Dig deep enough into their own writings, and those of the transatlantic "think tanks" funded by oligarchs and corporations from which they draw their inhumane tropes, and you will find, everywhere, an overarching belief in the inherent superiority of a privileged few (based either on money, genetics, race – or all three) along with an often visceral disgust for the rabble and their unimportant "needs," their stupid aspirations for a better life. No one exemplifies this better than the man actually in charge of the operations of the UK government today, the unelected "advisor," Dominic Cummings. His blog is like a festering cesspit from which the night mind of these depraved extremists bubbles up in raw form.

So while it's always tempting to laugh at their clownish ways, their bumbling, their "gaffes," the reality is not funny at all. Exactly like Trump, they have clowned their way into power, spouting obvious and outrageous lies ("£350 million a week!" "Oven-ready Brexit!"), and are using their buffoonery as a shield and distraction to cover their dangerous and destructive policies.

This is the racist goober who called black people – in print, in national publications, in the 21st century – "piccaninnies," wrote about their "watermelon smiles," and said the problem with Africa is that "we're not in charge anymore." His public racism has always been FAR more crude and open than Donald Trump's dog-whistles. It's absolutely sickening to watch him waddle out to read off a few insincere words – knowing he'll go straight back to his minder and controller, Dom Cummings, a eugenicist who believes openly in the genetic superiority of an elite "2%" who should be groomed to rule society. Given the ugly filth that Johnson is happy to spew in public, God knows what he and Dom say behind closed doors. What an abysmal collection of third-rate, evil-minded, death-dealing hacks.

3. A Glimmer of Hope for Tormented Minds
We can no longer ignore the potential of psychedelic drugs to treat depression

This is absolutely vital research, which holds the promise of immense and profound benefits for the human race. It has been put on hold for 50 years, caught up in culture wars, sensationalism and polticization, which meant that reputable scientific institutions were not allowed to follow up on the promising breakthroughs of the 1950s. It's as if research into the proper application of penicillin was simply frozen for half a century after its discovery – think of all needless human suffering that would have entailed. The same thing is true here. I've been following Carhart-Harris's research (and that of others) for some time; it would be unconscionable not to explore the hope it offers for the positive, non-draconian treatment of many intractable and often tormenting mental ailments.