HOME TRUTHS AND PRESS FREEDOM – WHAT THE CASES OF JULIAN ASSANGE AND IVAN GOLUNOV MEAN FOR THE AUSTRALIAN PRESS, AND VICE VERSA 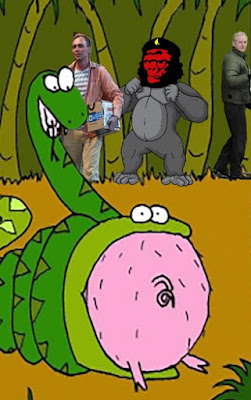 Moscow - Following police raids last week on a reporter for the Murdoch press in Canberra and the Sydney office of the state Australian Broadcasting Corporation (ABC), journalists in Australia have appealed for international solidarity on press freedom — a cause which they themselves have failed to defend when others were under the gun.

Do they deserve it?

In money terms, journalism is an undeserving, unprofitable business everywhere. Newspapers in most of the English-language world are cutting journalist jobs – in the US at a rate of 45% over the past decade; about the same in the UK and Canada; worse in Australia. For those who want to keep their jobs, police raids and prosecutions are reminders when self-censorship isn’t enough to prevent their investigating abuses of the law, war crimes, fraud and corruption.

In the case of Julian Assange (lead image, extreme right), the first hearing on the US indictment and application for his extradition will commence in an English magistrate’s court on Friday morning. Although it’s a first procedural step in a process likely to take three years, the identification of which judge will preside is important.

Not all English judges want to be responsible for rulings on whether Assange is facing political persecution and whether the US judicial system can try a national security case fairly. For background on the legal issues now at stake, read this and this.

Left: Home Secretary Sajid Javid authorized US extradition application
and sent his decision for the courts to review. Currently one of the contenders for
election as Conservative Party leader and prime minister, Javid said: “[Assange] is
rightly behind bars…It is a decision ultimately for the courts, but there is a very
important part of it for the home secretary and I want to see justice done at all times
and we’ve got a legitimate extradition request, so I’ve signed it, but the final
decision is now with the courts.”
Right: Chief Magistrate Emma Arbuthnot is likely to preside in the case, according to
Bar sources; for her record for refusing extradition in cases involving the Russian courts,
read these reports. Behind the scenes, Sajid and the Lord Chancellor, the senior judicial
officer in the UK, can influence the selection of the judge who will conduct the Assange case.

In the case of Ivan Golunov (lead image, centre), the Russian reporter was targeted by businessmen engaged in a funeral business he was investigating. They tried warning him off. When he refused, they and their allies in the Moscow police, the federal Interior Ministry and the security services, arranged Golunov’s arrest and jailing on June 6 on fabricated drugs evidence. A Moscow court released him to house arrest on June 8, then dismissed the charges on Monday. On Wednesday the senior officials in charge of Moscow’s western district were dismissed.

In Australia, the Australian Federal Police (AFP) raided the home of a Murdoch newspaper reporter in Canberra on June 6, and the ABC headquarters in Sydney on the following day. The police claimed they were acting on search and seizure warrants approved by the federal Defence and Home Affairs ministries, though the Defence Minister claims she was not consulted in advance. The AFP has also changed its public statement of the legal purpose and statutory authority for the warrants.

The cases the government is running relate to publications in July 2017 of Australian war crimes in Afghanistan; and in April 2018 of proposed state surveillance of citizens without warrants.

Left: Rupert Murdoch, whose News Ltd controls about half Australia’s press.
His company issued a statement saying: “This raid demonstrates a dangerous act of
intimidation towards those committed to telling uncomfortable truths. The raid was
outrageous and heavy handed. News Corp Australia has expressed the most serious
concerns about the willingness of governments to undermine the Australian public’s right
to know about important decisions Governments are making that can and will impact
ordinary Australian citizens.”
Right: David McBride, former Australian Army lawyer, leaked documents on
which the ABC based report of war crimes by Australian soldiers in Afghanistan.
A Canberra court hearing is scheduled June 13. McBride’s defence is that
government officials legally obliged to report wrongdoing. “I’m seeking to have the case
look purely at whether the government broke the law and whether it was my duty as
a lawyer to report that fact,” McBride has said.

For details of the war crime case, read this; and for background on the second case, click. Listen to the discussion with Chris Cook, broadcast on Thursday morning, Canadian Pacific time, running from the 2nd minute to the 26th. Open the link here.

Gorilla Radio is broadcast every Thursday on CFUV 101.9 FM from the University of Victoria. The radio station can be heard here. The Gorilla Radio transcripts are also published by the Pacific Free Press and on the blog. For Chris Cook’s broadcast archive, click to open.