An Open Letter to Media Lens - XR: After sounding the alarm - What is "real change"?

Dear David and David, sounding the alarm so that "real change" happens? As you say Cory Morningstar is well intentioned and she has a message too - she tells us what the elite agenda is. Their agenda would be "real change" all right - in the completely wrong direction.

So Cory Morningstar has done us a favour. She might not express it as carefully as she might but we ought to try and understand what her message is too... I think you have only partly understood it.

I write as as a retired social ecological economist (if you ever retire) I broadly agree with her description. I've been involved in the climate movement for over 2 decades and despaired. Extinction Rebellion have done a tremendous job of releasing the passion - but what are its political aims? What kind of "real change"? My attitude to XR is ambivalent. I am impressed by their militancy and commitment. By their spirit of self sacrifice. But I am unimpressed by an absence of an idea what "real change" for them would be. And you too.

Tell us the truth about climate change? What is that and how is it different from the debate among climate scientists and at the IPCC period reports? Decarbonisation by 2025 = 4 times as fast as the call to halve emissions by 2030.

Since 80% of the UK energy supply is fossil fuel based it's not possible. I wish it was possible, but it isn't. Just constructing a wind farm can take 4 years.You would have to increase the rate at which renewables are constructed and installed by an order of magnitude. You could not do that without training more engineers and that takes 3 years and more.

All of this would take a lot of fossil fuels to achieve...

You make a big thing about this...in my years I've seen plenty of declarations. Starting with Rio championing the rights of future generations - while the police in Rio were organised in squads to kill street children.

As I recently wrote:

"I would be convinced that this was being treated as a real climate emergency if the sale of fossil fuels were BANNED without a permit – and the permits were limited and rapidly reduced over the next few years (while making sure that the burden does not fall on the poor through a policy like cap and share ).

I would be convinced if the government or Labour Party announced a programme of measures like BANNING the use of private motor vehicles except by disabled people and if people want to travel they have to use public transport or get on their bikes. Also BANNING air travel except for emergencies.

Or getting everyone to turn their thermostats down and wearing jumpers and thermal underwear if they are cold.

Or which insisted that farmers adopt regenerative agriculture techniques to sequester atmospheric carbon down into soil carbon.

Or I would believe that this was being treated as a real Climate Emergency if there were swinging tax increases on the rich to decrease their consumption because it is their consumption that is leading the the largest amount of emissions.

IF policies like these were being adopted THEN I would believe that it was being treated as a REAL CLIMATE EMERGENCY – instead of Greenwash for an elite agenda for growth."

As it is what I see is a group of growth junkies salivating at the (delusionary) idea that a "Green New Deal" will rekindle economic growth – when Britain and the world has already overshot the carrying capacity of the planet. In this regard ecological footprint analysis tells us that, measured as an area, biocapacity cannot be more than 1.2 hectares per person for sustainable use. Yet the UK consumes 4.7 hectares per person. We are living as if we had access to the resources of nearly 4 extra planets – yet the “green growth” junkies tell us we can have more still.

So let's be perfectly clear – the vote for a Climate Emergency was an empty gesture. Without tangible policies to address the emergency it is vacuous – and Labour's policy as expressed here is: (a) not enough and (b) puts the stress on the wrong things. The only serious approach is to reduce resource use – while trying to make sure that people are looked after and safe during this process and trying to ensure that the people who consume most give up the most - but not increase!

Yes, the elite actors who are playing a PR game to change the political climate have done a good job in helping to mobilise people to express their fears and worries – but if, as appears to be the case, this mass activity is being used to promote an agenda that will fail without degrowth then it will turn out to be counter-productive. 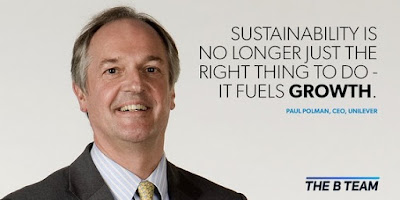 Here is a XR business leader

You write that you think that the propaganda model of Chomsky and Herman might break down in a situation like this. I don't. You are talking about the corporate elite and mainstream politicians abandoning their religion, their faith - and that is growth.

Here is a quote from Lord Nicholas Stern before the Paris COP meeting. It shows what he thinks is important. At the time a lobbying document was written and used called "Better Growth. The New Climate Economy" on page 9 tit says "In the long run if climate change is not tackled growth itself will be at risk."

That's the elite agenda at the moment and unless there are tangible alternative ideas for what real change is - which would mean degrowth - that is what you will get - and elite agenda to try to revive flagging economic growth by a raid on pension funds and state financing for a phony green new deal. It's there in the XR website.

Yes, a GND will be "real change" but it won't bloody work as I show on two recent articles:

It won't work because renewable energies can only support an economy that is much smaller in size – and what they can provide power for will have to be prioritised - rather than assuming that renewable energy will be abundant and can be the basis for a continuance of a growing consumer society. (eg. Local renewables should be prioritised to things like keeping local hospitals running, like keeping water supplies functioning ).

At this point I should also draw attention to other aspects of their "real agenda" - as opposed to the non existent XR alternative "real agenda". To financialise nature, to make a grab for the money in the pension industry. Neither will work as envisaged. The point here is that the “fourth industrial revolution” that these growth junkies are aiming for will be unaffordable. The material resources are not there for a fourth industrial revolution – neither energy resources and nor mineral resources.

Depleted resources are expensive to extract so the shiny new world of renewable energy and electric cars will be expensive to construct. Few will be able to afford this brave new world and the future of the innovators is likely to include a large number of bankruptcies.

We can already see what is going to happen with this strategy in broad outlines. If the pension industry provides the capital it will only happen if backed by policies and on state guarantees that cannot be withdrawn without them collapsing - the idea will be that the losses will be paid by the tax payer.

And there will likely be losses for the same reason that for ten years fracking has made a loss – the fracking industry has been unable to cover its costs. It can only keep going by suckering investors. The same will be true for the renewable energy systems.

The cost of this new energy system will be too great for the rest of the economy to afford – and that will show up in a gulf between costs and what the shiny new infrastructure will get back in revenues.

I can already hear the engineers and economists saying that costs are falling and will fall further so that I am wrong. The mantra is the cheapness comes with learning how to make things more efficiently and with scale. That's what Stern said would happen in he famous Report.

Even more so when the very scarce minerals necessary to their functioning runs out in just a few years. Depletion means extraction of minerals and energy costs more – we are seeing that with shale and that will have a knock on effect on the things made with the remaining energy and minerals – like wind, wave and solar energy harvesting equipment. Things do not always get cheaper – they sometimes get more expensive.

Additionally there's the extra cost of buffering intermittency, of extending grids. “Smart grids” sound fabulous – until you realise that the micro chips in them are highly energy intensive to manufacture – not to mention that these smart technologies will be a vehicle to bring in a health catastrophe called 5G, the internet of things and an living environment saturated with toxic microwaves….

In conclusion – as Tad Patzek explains there are simply not enough resources left for the kind of mobilisation that is being proposed:

“To compare the WWII industrial effort with the global dislocation necessary to ameliorate some of the effects of climate change is surprisingly naïve… This comparison also neglects to account for the human population that has almost quadrupled between the 1940s and now, and the resource consumption that has increased almost 10-fold. The world today cannot grow its industrial production the way we did during WWII. There is simply not enough of the planet Earth left to be devoured.” (quoted in an article by Tim Watkins )

I understand the emotional wish not to criticise a a child and now young woman who has done so much. No one is criticising her - it is the people behind her, Yes she has criticised them too - unfortunately that doesn't get reported as much. Above all what is their agenda for "Real change"? She has criticised a growth agenda too. Would it not show more respect to her to focus on that part of her message, rather than focus on the messenger?

If you are going to launch a rebellion you better have an idea what it is trying to achieve - or the "real change" will be made by others.