Sorry For The Delays Victoria -- We're Slowing Down Climate Change 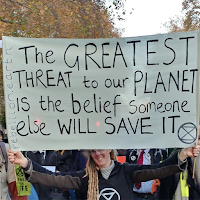 2018 has been a year of unprecedented wildfires, heat waves and accelerating polar melt; record hurricanes, mudslides and floods; mass marine life die-offs and the loss of biodiversity around the world.

Our day-to-day experience now confirms beyond any doubt that climate change is a full-blown global emergency.

All of this only demonstrates what the scientific community has been telling us for decades.

This year’s UN Report on Climate Change is the most dire yet, proclaiming that we have only a dozen years to avert runaway climate change. Since 1970, 60% of the planet’s non-human species have vanished.

Our governments are in Poland this week for a climate conference, but if past performance is any indication the only outcome will be a vague commitment to another set of totally inadequate targets, and once back home, politicians will fail to take even the most basic steps towards meeting them.

Certainly, our governments have given us very little reason to trust them. Together, Horgan and Trudeau have expanded gas fracking in the interior and joyfully announced a mega-LNG terminal in Kitimat, with plans in the works for many more to come. They have sanctioned the senseless logging of our remaining old growth rainforests, they allow continued threats to the marine environment from farmed salmon, and they continue to expand the mining sector. Despite all the green rhetoric while they were in opposition, Horgan’s polices look much the same as Christy Clark’s did, and Trudeau’s environmental record is as bad as Harpers’.

Neither government has shown any real leadership funding green technology or moving towards green energy, and both continue to offer foreign fossil-fuel companies windfall subsidies instead of using that money to create sustainable jobs for British Columbians.

In short, their climate agenda is as stuck as a duck in a tarsands tailing pond.

Our leader’s utter failure to lead is no longer acceptable, and our governments simply cannot be allowed to sit on their hands any longer. Like it or not, we are all now on the frontlines of extreme climate disruption and mass extinction. We are all now living in a climate risk zone, awaiting the next civic alert or state of emergency.

After the UN report, every old growth tree logged, every oil and gas well drilled, every pipeline constructed, every gas guzzling car that is made, every LNG ship launched, represents a betrayal of the public interest.

In this context, it is becoming increasingly clear that asking our politicians politely won't do the job. It’s going to take bold, courageous grassroots action to fight climate change.

That’s why Rise n Resist! and Extinction Rebellion Vancouver Island are initiating an escalating, non-violent and people-powered civil disobedience campaign that will take us to the streets and force our politicians to recognize that business-as-usual is no longer an option. We invite the people of Greater Victoria to join with us to demand a halt to all new fossil fuel extraction and immediate, just transition to a green economy.

You can find us on facebook at www.facebook.com/riseandresistkm/ or email us at:  This email address is being protected from spambots. You need JavaScript enabled to view it. to get involved.

If you are ready to see real action, if you feel called to stand up for planet, if you stand in solidarity with the indigenous stewards of this land, if you are sick and tired of watching politicians prioritize their own careers ahead of your future, now is the time to show it – before it’s too late. Together, we are powerful. Together, we can disrupt the status quo and usher in a new, greener future.

Our first action, a temporary blockade of the Johnston St Bridge at 5:30 on Monday, Dec 3rd, marks the first day of the UN Climate Conference. We will block traffic for 12 minutes, one for each of the 12 years we have left to avert a global disaster. While we regret any impact on commuters, our goal in disrupting the daily routine is to make this issue impossible to ignore. More disruptions will follow until the transition to a green future begins.

The time to rebel for life is now. Join us.

The authors are longstanding environmental and
social justice activist-organizers residing in Victoria.