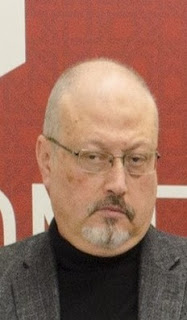 Last Tuesday, within about an hour of his announcement on the murder of Jamal Khashoggi announcement, in the heat of the moment, I commented on the president’s acceptance of the Riyadh royals’ explanation of the Istanbul consulate incident. I called his statement “crude” and “buttheadedly amoral.”

I should have stated the obvious broader point: It was wrong.

Marxists have historically inveighed (appropriately) against capitalism, imperialism, semi-feudalism etc.—neutral moral categories—using such terms as “reactionary” and “opportunist” when desiring to add a moral edge. And certainly capitalist profit and imperialist hegemony factor into Trump’s response to the cold-blooded crime.

But sometimes it’s best to go back to the basics, and draw upon primordial human vocabulary. The murder of the dissident Saudi journalist was pure evil.

The prohibition on killing occurs in the earliest law codes and taboo lists. It’s understood to have limited application; rulers can use military force to maintain power and “preserve order.” But generally speaking humans concur that it’s wrong to kill someone. It’s wrong. This is basic. For those arriving from outer space it is Humanity 101. It is of course the Sixth Commandment in the Bible. It is fundamental to the contrat social of Rousseau.

Killing means something different to those who believe in an afterlife and those who believe we die and disappear. Those of us who believe the latter perhaps value life more since it’s all we expect. The taking of another’s life seems especially presumptuous when you cannot, for example, pray for the soul of the person you’ve slain encouraging its rebirth somewhere, like in the Pure Land of Amida. The warrior Kumagae supposedly prayed for Atsumori after killing him during the Genpei War in Japan in the 1180s, to alleviate his sorrow and guilt..

But I don’t believe in afterlives. I don’t believe in Amida’s Paradise, or the Christian one, or the Paradise (Garden of Eden) described in the Quran as one of “gardens under which rivers flow…and beautiful mansions in gardens of everlasting bliss” (9:72). Here there “will be thrones raised high, and cups set at hand. And cushions set in rows, and rich carpets (all) spread out” (88:10-16). I wonder in Muhammad bin Salman believes this, or whether he thinks it important to observe Muslim burial practices that include washing the body as soon as possible after death, enshrouding it in white linen, praying over it, and burying it without a coffin. (The Turkish police speculate that the Saudis dissolved Khashoggi’s body parts, which would be a terrible violation of Muslim law, but they might have been transported to Saudi Arabia.)

What they did in that consulate was final. I think again of Yevgeny Yevtushenko’s poem “People,” a wistful appeal for people’s right to exist.

In any man who dies there dies with him

his first snow and kiss and fight.

It goes with him.

There are left books and bridges
and painted canvas and machinery.
Whose fate is to survive.

But what has gone is also not nothing:
by the rule of the game something has gone.
Not people die but worlds die in them.

Killing in wars has historically been tolerated so long as the war can be justified in order to preserve the above mentioned “order.” So for example, the Saudis and their U.S. backers depict the ongoing war in Yemen as an effort to thwart Iranian proxies, the Houthis, from imposing a Shiite dictatorship over the country. (This depiction of the situation would be laughable were it not so accepted by the gullible talking heads on cable news.) There has been little popular outrage in the U.S. at the war crimes of Saudi Crime Prince Muhammad bin Salman.

No, the focus is on his responsibility for Jamal Khashoggi’s death. It feels more wrong than the mega-death theater raging on the Saudi border—because there’s a face on it and the relentless reminders from the writer’s Washington Post peers that their colleague was brutally murdered by the Saudi state.

The drama of it, if we can believe the Turkish press reports! The Crown Prince and his brother, the ambassador to the U.S., discussed luring Khashoggi to the Istanbul consulate. Indeed, the brother, Saudi ambassador to the U.S. Prince Khalid called Khashoggi telling him to report to the consulate to get his documents to marry his Turkish fiance. Someone in the court in Riyadh ordered the dispatch of a team (“hit-squad,” the Turkish police call it) of 15 identified Saudis, including several members of the prince’s security detail and the kingdom’s top forensic doctor armed with a bone saw, to apprehend his body and smuggle out his parts while a doppelgänger dressed in his stolen clothes walked to a nearby mosque to discard the clothing. All that’s just basically wrong.

It’s wrong in such detail you’d think anyone would recoil in horror at those responsible. Anyone with a modicum of morality.

And think about this. As in the days after Khashoggi’s disappearance Oct. 5, the Saudi ambassador in Washington (again, a brother of the Crown Prince, who had been on the phone to Khashoggi) told Secretary of State Mike Pompeo that Khashoggi had left the consulate but the surveillance cameras had been turned off. We know the Saudis spent a special team to sanitize the consulate and consul-general’s home before Turkish police were allowed to investigate. The Saudi explanation has repeatedly changed and the Europeans have so far rejected it. The Saudis have given no explanation for the missing body.

This is wrong at so many levels, not the least in its very obviousness. The Saudis are lying. And yet Trump said Thanksgiving Day at his golf course in Foirida: “I hate the crime, I hate what’s done, I hate the cover-up. I will tell you this: the crown prince hates it more than I do.”

What? Trump wants the people of the world to think the Crown Prince hates the murder and dismemberment of Khashoggi more than he himself does? What is the point of saying that, while continuing to admit that maybe the prince did it? That’s both wrong and stupid. The worst possible combination. “Who should be held accountable?” he was asked at Key Largo. “Well,” he replied, as though addressing small children, “maybe the world should be held accountable, because the world is a vicious place. The world is a very, very vicious place.” he added, raising his eyebrows and rolling his eyes as if to suggest this viciousness is beyond mortal ken.

Yes, Trump said that Thursday. This too is just wrong. Feigning ignorance is morally wrong. Any small child knows this is wrong. It’s wrong to whitewash murder, especially when it’s designed to protect billions in arms contracts that spell death to tens of thousands of civilians. If Trump can get away with this, and the Saudis emerge unscathed, then morals mean nothing in this world, anything goes, brute force guided by hate and resentment should prevail. Sheer lies should compete with empirical reality, on an equal basis; reportage of fascism should recognize good on both sides.

More Trump: “…and we have 100s of 1000s of of jobs [from Saudi Arabia] and frankly if we went by this standard [of punishing calculated state-sponsored murder] we would not have any allies because look at what happens all over the world.” In his inarticulate, semi-comprehensible comments he pronounces the truth unknowable, acknowledges that his interest in the case is low, notes matter-of-factly that Saudi Arabia is not unusual as a brutal, murderous U.S. ally and that continued arms sales to the murderous kingdom is this nation’s (“nationalist”) primary aim.

America first! Standing boldly at the head of the world, or trying to, it embraces Saudi Arabia and Israel, covering up their many crimes, while vilifying Iran and openly planning for its destruction.

One CNN consultant (Joel Rubin) refers to the “anti-intelligence mentality of this administration.” Why beat around the bush? It’s an anti-truth mentality. It’s a cover up truth mentality. The administration is wrong in virtually all it does. It lies as matter of course. It is fundamentally evil. And now it has come as close one can imagine to celebrating a Black Mass on the White House lawn: it is lavishing praise on murderers for cutting the price of oil.

On Wednesday, as if to trumpet his success in placating Saudis upset about the fuss about Kashoggi, Trump tweeted gleefully: “Oil prices getting lower. Great! Like a big Tax Cut for America and the World. Enjoy! $54, was just $82. Thank you to Saudi Arabia, but let’s go lower!” Let’s put all that unpleasantness behind us, while America tries to regain its greatness—like the Wizard of Oz team, without a brain, heart or courage—while the whole world recoils at its increasingly naked amorality.

Far from the moral compass it has postered as for two hundred years, the U.S. has become a pariah. In particular, the U.S. rejection of the “Iran Deal” and effort to proactively sabotage it to provoke a war, based on lies (like the Iraq War, the destruction of Libya, the ongoing Syrian intervention) in order to establish hegemony over all of Southwest Asia ) is unqualified evil. The nice thing about Washington’s virtual nod to the Crown Prince to continue at his post is that it bares the evil so plainly.

The U.S. is a rogue state supporting a myriad of rogue states “all over the world” as Trump frankly notes. What’s right has nothing to do with it. Trump is proudly mired in moral wrong, so as to actually boast about it. He seeks to pull his fan base into that wrong, whipping up the inner fascism there just under the surface. May visceral disgust mount all over the world, among those of differing values and ideologies. Because if this can pass, and the Yemeni carnage can pass, then concentration camps and World War Three. Idiocy and evil are in power, the worst possible combination, but maybe the best possible to prompt the revolution that must come.

Gary Leupp is Professor of History at Tufts University, and holds a secondary appointment in the Department of Religion. He is the author of Servants, Shophands and Laborers in in the Cities of Tokugawa Japan; Male Colors: The Construction of Homosexuality in Tokugawa Japan; and Interracial Intimacy in Japan: Western Men and Japanese Women, 1543-1900. He is a contributor to Hopeless: Barack Obama and the Politics of Illusion, (AK Press). He can be reached at: This email address is being protected from spambots. You need JavaScript enabled to view it.