What We Must Do Now: Abrams, Georgia & Something Extraordinary 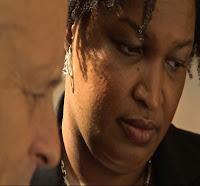 Days ago, I received a call from Stacey Abrams’ lead attorneys. Our investigative team had “gold,” as they put it, for litigating the election: Expert analysis proving 340,134 voters were wrongly purged.

Plus, we had, on camera, victims of the purge, including the 92-year-old cousin of Martin Luther King. But I’m a journalist, not a campaign operative. I could only offer my reports and my affidavit filed in federal court in Common Cause v. Brian Kemp.

With Stacey Abrams no longer in the race for Governor, we are now free to open our files to her new voting rights group, Fair Fight Georgia.

Did you note that Abrams cited our story of 92-year-old Christine Jordan purged from the voter rolls? That should give “Governor-elect” Kemp pause. Because that’s the signal that this heartbreaking story will become the hammer to smash the Kemp-created Jim Crow machine.

(And Ms. Jordan is up to the task, telling me she’s willing to take the fight into federal court, “If somebody will help me walk there.”)

The immediate weapon will be litigation against the State of Georgia to show that the election was hopelessly tainted, which, under Georgia statute, could result in a court throwing out the whole rotting dung-heap of an election. That is why Abrams technically did not concede, but rather dropped her claim to office. (Lawyers will understand that she has to maintain “standing.”)

Abrams vocally took up the issue of the massive purge of voters – and intends to defend those purged. This is what’s really historic about her candidacy. Yes, Abrams is the first African-American woman nominated for governor by the Democratic Party. More revolutionary is that she is the first Democratic candidate to demand an end to racist ethnic cleansing of the voter rolls. (If Al Gore had taken that stance in 2000, maybe Stacey would be Governor today – and, hey Al, they’d be calling you Mr. President.)

Our investigation produced the facts – and the names and addresses of the 340,134 voters wrongly purged for supposedly moving out of Georgia or out of their congressional districts – but never moved an inch.

We are now free to hand over those lists to the Abrams litigation team, the NAACP, the SCLC, ACLU and others who are opening courtroom fronts. We are talking with them all.

“It’s Jim Crow all over again.”

And my own suit against Kemp and his successors continues in Atlanta federal court with my co-plaintiff, Helen Butler, Executive Director of the Georgia Coalition for the Peoples Agenda. That group was founded by the Rev. Joseph Lowery, now 97. When I described to him the details of Brian Kemp’s voter-roll trickery, he said, “It’s Jim Crow all over again.”

There was no despair in Lowery’s voice about America’s new backsliding on civil rights. Rather, he and Helen are up for the fight.

If Rev. Lowery and Christine Jordan are up for it, can we do anything but join?

And the battlefront is wide. While we’re suing in Georgia, attorneys for the Palast Investigative Fund have also filed notices of suit in 25 other states that employ the Kemp-Kobach voter-erasing games. (Yes, Kris Kobach is the man in Kemp’s shadow. Kobach provided Kemp with 106,000 of the names Kemp wrongly purged. Surprised?)

Why did Stacey Abrams have to end the fight over the count? Because Kemp not only planned his crime carefully – and make no mistake, knowingly preventing citizens from voting is a crime – Kemp also had a brilliant “getaway” scheme. 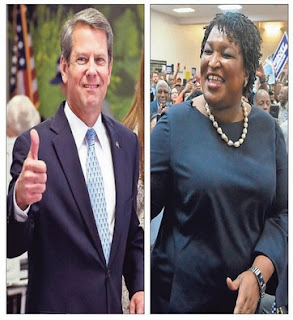 I saw it firsthand in DeKalb County on Election Day. I knew that some portion of the 340,134 voters wrongly purged would attempt to vote anyway as is their right under federal law. Any American that signs a statement that he or she is a citizen and provides a local address has the right to vote “provisionally.”

This was Abrams’ hope. If courts would order the counting of provisional ballots of those wrongly purged, she’d be governor. The GOP clearly thought of that. So, to being with, they simply refused to count the provisional ballots.

But worse — and this is as brilliant as it is evil and illegal – officials simply refused to give voters provisional ballots.

So, you have to hand it to the Kemp forces: you can’t have a court order the counting of ballots that were never cast: Like the ballot never cast by Yasmin Bakhtiari of Atlanta—illegally refused a provisional ballot though she wouldn’t leave the polling station for two hours – until her third plea for a ballot was rejected.

And this is where our work is also helpful to rights litigants: we have gathered the names of victims and their stories. We even have an official caught on camera refusing a legitimate request for a provisional ballot.)

I have been investigating Brian Kemp for five years. And I remember in 2014 shocking a Legislator, Stacey Abrams, with Kemp’s purge lists. She told my al Jazeera audience that she was furious that “our Secretary of State” was spending his time attacking the voter rolls.

Little did I imagine they’d be squaring off years later, and Kemp’s voter-roll monkey business would be decisive in the ugliest way.

Back in 2014, Abrams was most concerned that Kemp was operating vampire-style, “stealthily” purging voters in a secretive operation.

And that’s where investigative reporting comes in – and I’m not talking about insider gossip and leaks – but the years of work to extract the secret purge files, and to analyze reams of data that can tell a story. And today is when it pays off… not whether it helps this candidate or that, but whether the facts – those brave bits of truth – can speak.

I know a lot of my Democratic friends will be unhappy that their candidate lost. But don’t miss the power of this moment: you can say, you were here when the new rights movement was born.

Greg Palast has written four New York Times bestsellers, including Armed Madhouse, Billionaires &amp; Ballot Bandits, and The Best Democracy Money Can Buy, now a major non-fiction movie, available on Amazon — and can be streamed for FREE by Prime members! Stay informed, get the signed DVD of the updated, post-election edition of The Best Democracy Money Can Buy: The Case of The Stolen Election, a signed copy of the companion book — or better still, get the Book & DVD combo. Support

The Palast Investigative Fund and keep our work alive! Become a monthly contributor and automatically receive Palast's new films and books when they're released!

Or support us by shopping with Amazon Smile. AmazonSmile will donate 0.5% of your purchases to the Sustainable Markets Foundation which automatically goes to the benefit of The Palast Investigative Fund and you get a tax-deduction! More info . Subscribe to Palast's Newsletter or his separate list for Poems &amp; Stories. GregPalast.com