US Sanctions Shut Down ‘The Empire Files’ with Abby Martin 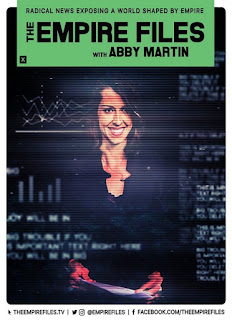 The Empire Files is temporarily appealing for donations on a one-time and monthly basis to continue production in the midst of US attacks on the TeleSUR Network.

As a result of US sanctions against Venezuela, The Empire Files has been forced to completely shut down operations.

The Empire Files, which airs on TeleSUR throughout Latin America and on Free Speech TV and The Real News Network in the United States, has been funded through a contract with the TeleSUR network. As Abby Martin’s primary broadcast, it has released over 100 documentaries, interviews and on-the-ground exposés from battlefields in Palestine, Venezuela and beyond.

As a result of financial attacks by the US government on the primary source of TeleSUR’s funding, production was halted before the completion of Empire Files Season Two.

Season Three, contracted for 26 episodes, was scheduled to begin on July 1. But with the US government blocking wire transfers that originate in Venezuela, the ability to receive funding has not been possible.

For over a year, funding has been sporadic and often delayed. The Empire Files has been operating by alternating between waiting for late payments and funding production out-of-pocket.

However, with US attacks and sanctions intensifying, the ability to receive funds appears to have been cut-off completely.

Contract TeleSUR journalists elsewhere, including at Empire Files, have had funding blocked by the US government for over 6 months. Even wire transfers not originating Venezuela, but ally countries which also fund TeleSUR, have been severed.

There appears to be no solution, and no end in sight, to this ongoing financial attack.

The Empire Files officially halted all production on May 27, and had to cut all staff prior to that. But we have been holding-off on an official announcement in hopes that the wall put in place by the Trump Administration would be overcome.

We are making this announcement now because, after numerous attempts and constant rejections of all types of fund transfers, we do not believe this barrier will be removed in the near future.

The depth of US attacks

The US State Department has been involved in regime-change projects in Venezuela since the election of the late President Hugo Chavez, first expressed by a violent coup in 2002. During that coup, Venezuela’s state media and pro-government media were shut-down by the US-backed junta. Yet economic sanctions on Venezuela were not implemented until the Obama Administration, in 2015.

The Trump Administration has taken these sanctions to new heights. The most recent escalation came on May 21, 2018, the day after President Maduro democratically won reelection—apparently to punish the Venezuelan people for electing the “wrong” candidate.

Today, the US sanctions on Venezuela are the worst sanctions on any country in the region since those against Nicaragua in the 1980s, according to Mark Weisbrot of the Center for Economic and Policy Research—a time when the Reagan Administration was waging a full-blown, bloody war against the Nicaraguan people. Similarly it is Venezuela’s poor and working class who are, by design, suffering most from the sanctions today.

These economic attacks cannot be viewed on their own, but part-in-parcel of a regime-change operation—while this is just one front in the US strategy, the sanctions are coupled with violent US-backed coup attempts in Venezuela, including the August 4 assassination attempt on President Maduro.

TeleSUR has always been included as a target for its association with the government. A thwarted US-backed coup plot in 2015 included plans to bomb the TeleSUR news building in Caracas. In 2017, a TeleSUR news team was ambushed by US-backed opposition forces and nearly lynched—one TeleSUR reporter was shot in the back during the assault.

Likewise, Abby Martin and Empire Files producer Mike Prysner were the target of pro-coup politicians and journalists, receiving hundreds of death threats and causing them to flee Venezuela where they were conducting on-the-ground reporting.

In addition, TeleSUR—along with the other main left-wing news source on Venezuela, Venezuela Analysis—were recently targets of online censorship. Already hit with “warnings” and “sensitive content” bans on YouTube and Twitter, their pages were recently deleted (although later reinstated) by Facebook. Facebook is currently collaborating with the Atlantic Council—stacked with CIA agents, Iraq war architects, Big Oil and the weapons industry—to decide which media outlets “sow discord.”

With only rhetoric of increased aggression coming from the Trump Administration, including threats of all-out US military bombing and invasion, there is no reason to think this multi-pronged attack will subside.

Future of The Empire Files

From the hidden casualties on the US-Mexico border, to environmental disasters in the endangered rainforest, to the most-viewed reporting on the crisis in Venezuela—interviews with President Rafael Correa, Cornel West, Noam Chomsky, Ahed Tamimi, and other important figures—profiles of often-unheard voices of migrant domestic workers, young revolutionary activists, immigrant children, hurricane victims, third-party candidates and more—to in-depth educational documentaries on socialism, the crimes of the US Empire, and histories and crises hidden by the mainstream media—The Empire Files has been extremely proud to make this small contribution to a broader movement for change.

But we do not intend to stop this project as long as there are possibilities to continue.

We are prepared to resume production of weekly programs for TeleSUR as soon as blocks on funding are lifted, or circumvented—however, this could mean six months, a year, or never. We know our colleagues at TeleSUR have been fighting for a solution for us and other contractors, and will continue to do so.

In the meantime, we are appealing to our supporters for donations on a one-time basis or as monthly sustainers to restart production, rehire staff and release new episodes for as long as funding permits. Current expenses include $6000 for Empire Files journalists in Gaza.

In the immediate term, we hope to raise enough funds to complete post-production on our recent, unreleased footage.

Most importantly, our urgent footage and interviews captured by Empire Files journalists in Palestine’s besieged Gaza Strip. This includes footage of the Great March of Return, video of never-before-seen brutality by Israeli forces against unarmed protesters at the border fence, interviews with family of slain medic Razan Al-Najar and wounded medical workers, and much more.

In addition, we have hours of unreleased footage of Abby Martin on-the-ground in Colombia’s “peace zones,” featuring interviews with FARC leaders and members, and a rare first-hand look at the countries historic peace process as it hangs in the balance after the victory of the far right in the Presidential election.

If we raise enough money to cover the cost of releasing all of this important content over a span of several episodes, we can then dedicate funds to new filming and production that is not subject to attacks by the Pentagon. This includes documentaries on everything from Trump’s war machine, to the hidden repression of environmental activists.

We ask for your support to expose the crimes of the US Empire at this critical time, as well as your solidarity with TeleSUR and Venezuela’s right to self-determination.