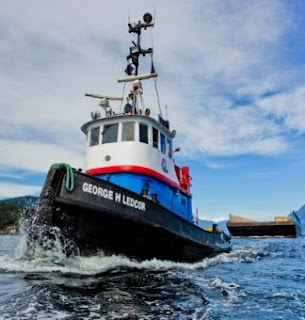 More than eight hours after it happened, there are still few details as to why the George H. Ledcor capsized, or just how much of the tug's estimated 22,000 litre capacity fuel tanks spilled into the Fraser River.

BC Spill Response says the incident occurred off Deering Island, on the North Arm of the Fraser, the province's largest single salmon-bearing river.

In a tweet released this morning, the Western Canada Marine Response Corporation (WCMRC) reported it had responded, deploying a team to the site.

"We have deployed and recovered sorbent pads and are now standing by on scene."

The City of Vancouver’s environmental team and BC Ministry of Environment are now too at the scene.

The George H. Ledcor is one of a fleet of nine tugs operated by the Ledcor Group.