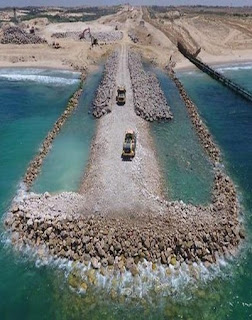 The project is slated to be completed by the end of 2018 and is likely to cost an estimated 25 million shekels ($6.7 million). When completed, the structure will stretch 200 metres out into the Mediterranean Sea, further cutting off the Gaza Strip from Israel.

The barrier will consist of three layers: an underwater base level; a 50-metre-wide sea-level platform made of armoured stone, and a six-metre-high barbed wire fence.

A further fence will also surround the barrier itself as “an additional security measure.” The barrier has been praised by Defence Minister, Avigdor Liebermann. “The construction of the barrier around the Gaza Strip, both on land at sea, is progressing at a rapid and impressive pace,” said the extreme right-winger.

“Every day that passes, our counterterrorism capabilities around the Gaza Strip are growing stronger.”

According to Ma’an, Liebermann added that, “Hamas is losing its capability to attack Israel every day.”

The initiative will likely be seen as a further attempt by Israel to tighten its siege of the Gaza Strip, which has been ongoing since 2007. Israel has closed all pedestrian and commercial crossings into and out of the enclave and has constructed a “security fence” along the Green (1949 Armistice) Line which serves as a border. Alone of all UN member states, Israel has never formally declared where its borders actually are.

A no-go area of approximately 300 metres is also imposed on the Gaza side of the fence, restricting the access of many families and farmers to their land. Israel has also imposed a naval blockade on the Gaza Strip, which currently limits Gaza’s fishermen to a distance of three nautical miles, some 17 less than was original proposed under the Oslo Accords of the early 1990s. Last week, two ships belonging to the Freedom Flotilla attempted to break the naval blockade, but were intercepted by Israeli naval forces in international waters.

Crew members of Al-Awda, the first ship to be intercepted, have accused Israeli forces of violence and other governments have said that Israel’s actions broke international law. The impact of the siege has been severe. Gaza’s industrial and commercial sectors have been damaged, with Israel’s ban on imports of fuel and gas leading to shortages and high unemployment.

Last week, senior UN officials voiced concern over the humanitarian situation facing Gaza’s children and the continued violation of their rights. Deputy spokesman for UN Secretary-General, Farhan Haq, said that the officials “called on all sides to put children’s rights ahead of any other considerations, and to take immediate steps to alleviate their suffering.”

This work by Middle East Monitor is licensed under a Creative Commons Attribution-NonCommercial-ShareAlike 4.0 International License. If the image(s) bear our credit, this license also applies to them. What does that mean? For permissions beyond the scope of this license, please contact us.