Canada Has Blood On Its Hands; Justice in Honduras Requires a U-Turn in Canadian Foreign Policy
by MiningWatch Canada
April 21, 2016 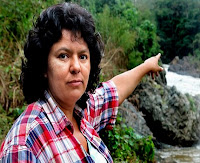 Ottawa - Today, First Nations women leaders, legal and human rights activists called on the Canadian government to take a lead in calling for an independent, international investigation into the murder of world-renowned Indigenous activist, Berta Cáceres, and an investigation into Canada’s engagement with the Central American country since a 2009 military-backed coup.

The group returned to Ottawa on Tuesday after a seven-day trip to Honduras that was organized in the wake of the brutal murder of Indigenous and environmental activist Berta Cáceres on March 2, followed by the murder of Nelson García on March 15.

Berta Cáceres was a Indigenous, feminist and environmental activist and winner of the 2015 Goldman Environmental Prize whose murder sparked unprecedented outcry around the world for justice, truth and reparation in Honduras. García was member of the Civic Council of Indigenous and Popular Organizations of Honduras (COPINH), an organization that Cáceres co-founded.

Delegations from twenty two countries turned out to participate in an international gathering organized by COPINH and others in Honduras last week. Despite the strong international presence, a caravan to commemorate Berta’s life along the Gualcarque river was violently assaulted on April 15.

“We saw first hand how police collude with violent men to protect powerful interests. When members of COPINH led a caravan of Honduran and international activists down to the Gualcarque river to commemorate Berta Cáceres’ life, police stood with their shields facing peaceful protesters while armed men behind them yelled threats at members of COPINH,” described Mary Hannaburg, member of the Mohawk Nation and Québec Native Women.

“When the same armed group threw rocks and threatened peaceful caravan participants with machetes, injuring at least eight people, no one was detained or arrested. Meanwhile, COPINH members have been treated as if they’re criminals and the right of the Lenca Indigenous people to free, prior and informed consent over hydroelectric and mining concessions completely disregarded,” said Ms. Hannaburg.


Honduran investigators looking into the murder of Berta Cáceres were quick to go after members of COPINH after her assassination, calling it a crime of passion and trying without success to pin it on internal divisions within her organization. Meanwhile, they were slow to consider possible links with the Agua Zarca hydroelectric project and other megaprojects on Lenca territory, about which Berta was outspoken and had received numerous documented threats, leading to an order from the Inter-American Commission on Human Rights (IACHR) for the Honduran state to guarantee her and COPINH’s safety.

“The only viable option for an independent, impartial and thorough investigation into the murder of Berta Cáceres is for a team of international, independent investigators to be engaged under the auspices of the IACHR. Canada could take an important lead to urge the Honduran government to enter into such an arrangement,” stated Catherine Morris, delegation member and research director for Lawyers Rights Watch Canada.


Currently, the Honduran government is promoting involvement in the investigation of an OAS-backed anti-corruption unit in Honduras (MACCIH by its initials in Spanish).

“It would be deeply disturbing if the Canadian government decided to back this option, given that MACCIH neither has the mandate, the independence, nor the trust of Berta’s family and COPINH to properly engage in the investigation,” remarked Ms. Morris.


The delegation also questioned Canada’s role in Honduras during and since the 2009 military-backed coup, since which time over 100 activists fighting for land and a safe environment have been murdered.

The Canadian delegation visited a community in the department of Copán where Toronto-based Aura Minerals operates the San Andrés gold mine. They heard about the prevalence of health problems among children, as well as concerns about broken agreements, and the possible destruction of the community cemetery. Members of the local environmental committee in this area have also received death threats.

“The impacts that communities face around Canadian mining projects in Honduras are not much different from what we confront in Canada. But the situation is much more dire in the region right now for those who dare to speak out about impacts on health, land, sacred spaces and their community fabric,” stated Bev Sellars, Counsellor from Xat’sull/Soda Creek First Nation and Chair of First Nations Women Advocating Responsible Mining.


Nonetheless, since 2009, in the context of widespread repression and impunity, the Canadian government ratified a free trade agreement with Honduras in 2014 and provided technical assistance to a new mining code passed in 2013 that provides little protections for people and the environment, while it favours companies.

“Canada has blood on its hands and unless things change significantly, a bad situation will only continue to get worse in Honduras and in other parts of Latin America where community activists are regularly criminalized and killed,” concluded Sellars.