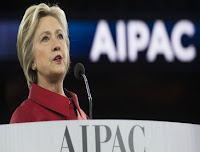 It is well known to Washington political observers that politicians invited to speak at the annual, giant AIPAC convention ask for suggested talking points from this powerful pro-Israeli government lobby.
Hillary Clinton’s pandering speech must have registered close to 100% on AIPAC’s checklist.
Of course, both parties pander to AIPAC to such depths of similar obeisance that reporters have little to report as news. But giving big-time coverage to sheer political power is automatic.
Compare it to the sparse attention given to the conference a few days earlier at the National Press Club on the Israeli lobby featuring scholars, authors and the well-known Israeli dissenter, Gideon Levy of the respected Ha’aretz newspaper (see israellobbyus.org/).
But Mrs. Clinton’s speech was newsworthy for its moral obtuseness and the way in which it promised unilateral White House belligerence should she become president.
A reader would never know that her condemnation of Palestinian terrorism omitted any reference to the fact that Israel is the occupier of what is left of Palestinian lands, colonizing them, seizing their water and land, brutalizing the natives and continuing the selective blockade of Gaza, the world’s largest Gulag ever since Israel closed its last colony there in 2005.
Clinton emphasized her condemnation of Palestinian children being taught “incitement” against their Israeli oppressors and the recent deplorable knife attacks against Israeli soldiers and civilians. She neglected to point to massive, daily Israeli incitement backed up by U.S.-supplied deadly weapons that over the last decade have caused 400 times more Palestinian fatalities and serious injuries to innocents than the defenseless Palestinians have caused their Israeli counterparts.
One of Prime Minister Netanyahu’s coalition partners, for example, from the Jewish Home Party, called for the slaughter of all Palestinians, the elderly and women in general.
“Otherwise,” the partner said (in an English-language translation from the Hebrew), “more little snakes will be raised there.”
Clinton did not mention any of these brutalities, though they are components of what is an illegal occupation under international law and the United Nations charter. The Yale Law graduate simply chooses not to know better.
Instead, she told her wildly-applauding audience of her support for increasing the amount of U.S. taxpayer spending for the latest military equipment and technology to over $4 billion a year. For the record, Israel is an economic, technological and military powerhouse that provides Israelis with universal health insurance and other social safety nets that are denied the American people.
In an obvious slap at President Obama, whose name she never mentioned (even Netanyahu thanked Obama in his address to AIPAC), Clinton almost shouted out:
“One of the first things I’ll do in office is invite the Israeli Prime Minister to visit the White House.”
This was a thinly-veiled reference to Netanyahu’s trip to a joint session of Congress, where he tried to undermine President Obama’s negotiations with Iran in what was an unprecedented interference by a foreign leader. Not surprisingly, Obama did not ask Netanyahu over to visit the White House for a drink before he headed back to Israel.
High on AIPAC’s checklist is to insist that all speakers condemn what Clinton called the “alarming boycott, divestment and sanctions movement known as BDS.” She then twice slanderously associated this modest effort (in which many Jews are active participants) to get Israel to lift some oppression from the occupied Palestinian territories, with antisemitism.
However, by totally erasing any nod, any mention, any compassion toward the slaughter of Palestinian children, women and men in their homes, schools and hospitals, Hillary Clinton makes a mockery of her touted Methodist upbringing and her declared concern for children everywhere.
For repeated applause at AIPAC’s convention and its associated campaign contributors, she has lost all credibility with the peoples of the Arab world. Moreover, such hostility in her words registers “the other antisemitism,” to cite the title of an address by James Zogby before an Israeli university in 1994.
With all her self-regarded experience in foreign affairs, Mrs. Clinton could pause to ponder why she is backing state terrorism against millions of Arab Palestinians trapped in two enclaves, surrounded by walls, military outposts, and suffering from deep poverty, including widespread diseases and severe anemia among Palestinian infants and children.
Unlimited is her militant animosity toward Iran, bragging about crippling sanctions that she spearheaded (which caused untold harm to the health and care of civilians), and threatening military force “for even the smallest violations of this [nuclear] agreement.” Yet for decades Israel has violated numerous U.N. resolutions to withdraw its occupation and repression of Palestinians without a murmur from Secretary of State Clinton, who as a candidate opposes a role for the U.N. Security Council (over which the U.S. has an often-used veto) in the peace process.
There were some restraints. She repeated her support for a Palestinian state but wondered whether the Palestinian Leadership was up to the negotiations. Also, she resisted going along with recognizing the shift of Israel’s capital from Tel Aviv to Jerusalem.
Her very oblique reference to illegal, expanding Israeli settlements did not amount to anything more than a wink, foreshadowing no action on her part to stop the expansion of colonies in the occupied territories should she reach the White House.
Near the conclusion of her deferential remarks, she stated
“If you see bigotry, oppose it. If you see violence, condemn it. If you see a bully, stand up to him.”
Some courageous Israeli human rights groups, such as B’Tselem, who defend Palestinian human rights, might view her words as applicable daily to how they perform their noble work.