What Will the Sandernistas Do After July?
by Ralph Nader - CounterPunch
March 4, 2016 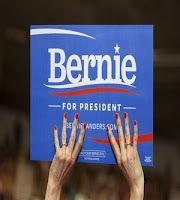 The hard-bitten, corporatist Democrats are moving Hillary Clinton through the presidential primaries. They are using “Republican-speak” to beat down Bernie Sanders as favoring Big Government and more taxes and they may unwittingly be setting the stage for a serious split in the Democratic Party.
What is emerging is the reaction of millions of Sanders supporters who will feel repudiated, not just left behind, as the Clintonites plan to celebrate at the Democratic Convention in July.

The political experience gained by the Sanders workers, many of them young, helped Sanders register primary victories over Hillary in Colorado, Oklahoma, Minnesota, Vermont and New Hampshire with their energy and votes.
They came close in Nevada and Massachusetts and probably won in Iowa.
Hillary’s rhetoric has outraged Sanders’ supporters. She berates Sanders regularly for not being practical or realistic about his Medicare-for-all, breaking up big banks, a $15 minimum wage, a tax on Wall Street speculation and carbon and getting big money out of politics. Clinton’s putdowns exemplify why so many people who back Sanders want to defeat her. Clinton is the candidate of the status quo, favored over all other candidates from both parties by the Wall Street crowd and quietly adored by the military-industrial complex who see Generalissima Clinton as a militarist who would maintain the warfare state.
Democrat Robert Reich, former Secretary of Labor under Bill Clinton, derided this “We Shouldn’t Even Try” attitude common among many frightened Democrats. These are, in Reich’s words, “the establishment Democrats – Washington lobbyists, editorial writers, inside-the-Beltway operatives, party leaders and big contributors who have grown comfortable with the way things are.” These hereditary Democrat opinion-shapers tell their audiences that Hillary personifies experience and electability. They argue it is either Clinton or Trump or some other crazed Republican.
Here we go again. Every four years, the Democratic leaders define the Democratic candidate by how bad the Republicans are. This is designed to panic and mute their followers. Every four years, both parties become more corporatist. Sanders’ voters want to define the Democratic Party by how good it can be for the people. And these Sanders voters may not go back into the Democratic Party fold.
Low turnout for the Democratic Party’s primaries is being compared to a much higher Republican voter turnout for their candidates. Low turnout in November would dim Hillary’s chances in an electoral college, winner-take-all system.
Such Democratic Party misfortune can become more likely should Bernie endorse Hillary at the Democratic Convention without any conditions or her acceptance of his agenda, assuming she is the nominee. Last year he declared that he would endorse “the Democratic nominee.” Certainly, all the Democratic politicos in the Congress who endorsed Hillary set no conditions. The large labor unions that went with Hillary are known for giving their endorsements without receiving any benefits for workers. So, Hillary would have no mandate should she win the election. And you know that Clintons without mandates tend to bend toward Wall Street and rampant militarism.
It is doubtful whether Hillary will credibly adopt any of Bernie’s agenda, considering where her campaign money is coming from and how unwilling she is to alienate her circle of advisors.
Where does this leave the Sanders people who see Hillary as experienced in waging wars, qualified as an entrenched pol, and realistic to suit the plutocracy’s tastes, and not really getting much of anything progressive done (alluding to the ways she has described herself)?
The energetic Sanders supporters, including the Millennials who voted so heavily for Bernie, could form a New Progressive movement to exercise a policy pull on the establishment Democrats before November and to be a growing magnet after November with the objective of taking over the Democratic Party starting with winning local elections. This will have long-term benefits for our country.
To those who point to history throwing water on such a potential breakout, I tell them to look at the 2016 presidential primaries. All bets are off when political debates become big media business with huge ratings, and when a gambling czar and builder of expensive real estate, Donald Trump (a hybrid Rep/Dem), is overturning all the old homilies about presidential politics, and is in a primary contest with two freshmen Senators whose vacuous ambitions are their only achievements.