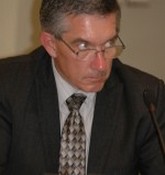 In the hurly burly world of CVRD politics the senior staff have come out the winners. Their role and influence trumps that of our elected representatives.
This is especially true with the $200 thousand plus per year CAO Brian Carruthers, a charming and capable controller who dominates today’s political culture at the CVRD.
Following the Board’s unanimous vote rejecting any new LNG facilities in the entire Cowichan Valley the CAO, General Manager of Planning Ross Blackwell and Chair Jon Lefebure had a meltdown of sorts.
CVRD CAO, Carruthers

There seems to have been a delayed response that took a couple of days to kick in. But once they had fully grasped the fact that the elected folks had actually initiated and carried out a directive in response to a rumoured Steelhead LNG proposal to establish a floating LNG facility with the Malahat Nation, they hatched out a plan to counter the elected officials' directive.
Chair Lefebure, Carruthers and Blackwell went to work to undermine our elected officials, casting shadows on the appropriateness and legality of the unanimously supported action opposing LNG facilities locating in the Regional District.
The Directors were warned that the CVRD could be sued.
Steelhead LNG’s CEO had previously discussed their proposal with General Manager of Planning, Ross Blackwell, but an application has yet to have been forwarded and the Directors were never fully advised of exchanges between Steelhead and Blackwell. One wonders.
The motion to oppose LNG facilities was ushered in by Cowichan Bay Director Lori Iannidinardo and seconded by Duncan’s Alternate Director Sharon Jackson.
These two senior politicians then heard about the other Directors concerns generated by this unthinkable project that would receive its gassy payload piped from Washington State through Active pass to the Saanich Inlet. From there it would be processed and then loaded onto ‘Super Tankers’ that make BC Ferries look like rowboats.
Six Directors spoke out publicly of their many valid concerns for any such LNG proposal in what was the highlight of their term so far.
Yet staff took it upon themselves to ignore their unanimous directive and set about scheming to undermine the will of the board. In the end they hope to persuade our elected representatives into flip flopping on one of the valley’s most important political developments.
On Wednesday, February 24th, the unanimously passed anti LNG facility motion was designated by staff to be subjected to another ‘In Camera’ meeting.
The Directors had already been influenced by the CAO, Planning Manager and Chair Lefebure’s pronouncements that there were legal problems that had to be addressed.
I would have loved to have been a fly on the wall at that questionable get together.
The CVRD CAO then hired a lawyer to get a legal opinion on the motion. The lawyer, Mr. Johnson, was actually present during the secret meeting. No expense is to be spared to prop up the controllers agenda.
Wouldn’t you like to see the questions the CAO asked the lawyer, and then read the citizen funded legal opinion that was used to undermine the democratic decision of the Board?
Was there a lawyer there to represent the unanimous view of opposition expressed at the February 10th meeting?
Of course not! Why not?
Will they be trying to rescind the motion opposing LNG facilities locating in our region? We’ll see.
I will provide readers with lawyer Jack Woodward QC’s response to the CVRD’s legal opinion sometime over the weekend. It is a breath of fresh air.
Clearly CAO Carruthers sees ‘In Camera’ as a three ‘C’ proposition. Comfort, Convenience and Control.
The entire valley is poorly served as a result.