Rebuilding and Expanding the North American Relationship
by Dana Gabriel - Be Your Own Leader
January 27, 2016 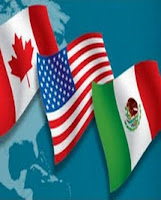 A major priority for Canada’s new prime minister is to reset the relationships with both the U.S. and Mexico. There is a real opportunity for all three countries to recommit to building a North American community. This includes expanding political, security and economic cooperation, as well as greater coordination on issues such as energy and the environment.
Further deepening Canada-Mexico ties is one of the keys to strengthening continental relations. The Trans-Pacific Partnership trade deal, which builds on the commitments of NAFTA could also help take North American trilateral integration to the next level.

During a foreign policy speech before he became Prime Minister, Liberal Leader Justin Trudeau emphasized the importance of North America and outlined his plans to improve Canada’s relationship with its NAFTA partners.
Trudeau discussed some of the problems facing Mexico and how Canada could help solve them. Trudeau noted, “In many areas, Canadians have the necessary expertise to address Mexico’s needs, from the building of public institutions to infrastructure development to civil policing. We should see in Mexico opportunities to develop our relations and our economies.” He went on to say, “What does this mean for Canada and the Canada-U.S. relationship? In my view, it means that we must once again look at the relationship in a continental context. We must see our own future in the future of North America.” Trudeau also proposed creating a special cabinet committee to manage Canada-U.S. relations and promised to work towards reducing barriers to trade and commerce between both countries. Furthermore, he pledged to push for a North American agreement on clean energy and the environment.

In June 2015, the Standing Senate Committee on Foreign Affairs and International Trade issued its report, North American Neighbours: Maximizing Opportunities and Strengthening Cooperation for a More Prosperous Future. The policy paper recommended, “The Government of Canada explore opportunities for Canada-Mexico cooperation on governance, security and rule of law issues of mutual interest, such as law enforcement and judicial capacity building.” It also identified energy, supply chain infrastructure and harmonizing regulations as some of the areas that should be addressed trilaterally. A news release described how, “Trilateral cooperation between Canada, the United States and Mexico on issues of mutual interest holds great promise for increasing North America’s future competitiveness and prosperity.” At the same time, the Committee conceded, “Geographic, linguistic and other factors have prevented the Canada-Mexico relationship from reaching its full potential. Canada’s relationship with Mexico should be an important focus.” They concluded that, “A stronger partnership with Mexico is a key way to strengthen the trilateral approach to North American relations.”

After becoming Canada’s new Prime Minister, Justin Trudeau reaffirmed his commitment to building better continental relations. Some of the key objectives highlighted in the Minister of International Trade Mandate Letter are to, “strengthen our relationship with our North American partners, advance bilateral and trilateral initiatives to reduce impediments to trade between our countries and to strengthen North America’s global competitiveness.” An important part of the Canada-U.S. relationship is the Regulatory Cooperation Council and the Beyond the Border deal, which promotes economic competitiveness and a perimeter approach to security. In March 2015, both countries signed an Agreement on Land, Rail, Marine, and Air Transport Preclearance, but it has yet to be implemented. Trudeau will get an opportunity to discuss border security, energy, climate change and trade, along with other bilateral issues when he meets with President Barack Obama on March 10 in Washington.

Some of the important priorities listed in the Minister of Foreign Affairs Mandate Letter are to, “Improve relations with the United States, our closest ally and most important economic and security partner, and strengthen trilateral North American cooperation.” This includes working to lift the Mexican visa requirement, which was imposed by the previous Conservative government and deeply resented in Mexico. Also high on the agenda is developing a continent-wide clean energy and environment agreement, as well as preparing for the next trilateral leaders summit that will be hosted by Canada sometime this year. At the 2014 North American Leaders Summit, the U.S., Canada and Mexico agreed to enhance energy collaboration, develop a continental transportation plan and establish a North American trusted traveler program. Last year, they announced an agreement to expand trusted traveler programs, which is the first steps toward the creation of a North American Trusted Traveler network. Former Prime Minister Stephen Harper was scheduled to host the 2015 leaders summit, but he postponed the meeting amid tension between Canada and the U.S. over the approval of the Keystone XL pipeline, which was pending at the time.

On November 6, 2015, President Obama formally rejected the Keystone XL Pipeline, arguing that project would not serve the country's national interests and how it would undercut U.S. climate global leadership. While Obama admitted Prime Minister Trudeau was disappointed by the decision, he also pointed out how both leaders, “agreed that our close friendship on a whole range of issues, including energy and climate change, should provide the basis for even closer coordination.” A statement by Prime Minister Trudeau insisted, “The Canada-U.S. relationship is much bigger than any one project and I look forward to a fresh start with President Obama to strengthen our remarkable ties in a spirit of friendship and co-operation.” Although the decision is a setback in enhancing North American energy integration, it does nevertheless provide an opportunity for both countries to reset relations. Just days after TransCanada was denied a permit for the Keystone XL, they were awarded a contract to build the Tuxpan-Tula Pipeline in Mexico. The company also recently launched a lawsuit over the Keystone decision. Under Chapter 11 of NAFTA, corporations have the power to challenge governmental laws and regulations that restrict their profits.

Before the Obama administration rejected Keystone, Democratic presidential candidate //medium.com/@HillaryClinton/why-i-oppose-keystone-xl-8698230df2a8#.8lf0gtsvn">Hillary Clinton came out against the pipeline. She stressed that, “Building a clean, secure, and affordable North American energy future is bigger than Keystone XL or any other single project.” Clinton followed this up by unveiling her, Vision for Modernizing North American Energy Infrastructure, which links the continent’s energy and climate objectives. If elected president, she has vowed to, “launch negotiations with the leaders of Canada and Mexico to secure a North American Climate Compact that includes ambitious national targets, coordinated policy approaches, and strong accountability measures.” With the creation of the Trilateral Working Group on Climate Change and Energy back in May 2015, the North American partners have already laid the foundation for closer cooperation on energy and the environment.

During his presidency, George W. Bush pursued deeper North American ties through the Security and Prosperity Partnership. Now the Bush Institute’s Economic Growth program is continuing with this agenda. They’ve launched a North America Competitiveness Initiative, which aims to further strengthen continental economic integration. In November 2015, they released the North America Competitiveness Scorecard, “as a tool to compare the competitive position of the United States, Canada, and Mexico, as a region, relative to other major economic regions and countries with large economies.” While North America earned a B+, the scorecard also identified areas where improvements could be made. A working group is currently developing a list of policy recommendations on issues regarding energy, human capital, and border infrastructure. The Bush Institute's Director of Economic Growth Matt Rooney stated, “The key to the prosperity and security of the American people lies in a closer North American economic relationship — in embracing the de facto North American community that has long existed and shaping it to ensure that it continues to enhance our security and prosperity.”

As part of efforts to encourage trilateral cooperation at a state and provincial level, the first-ever Summit of North American Governors and Premiers was held in October 2015. Mexican State Governor, Eruviel Avila Villegas acknowledged, “We are living at an historic juncture, where local governments are becoming key transformation agents and the source of international cooperation efforts. The origin of this summit represents a big step toward the building of a North American community.” When the event was first announced, a press release explained that the summit would, “focus on promoting economic development and trade through improvements and innovations in infrastructure and supply chain management, education, energy technology and culture.” Regional collaboration is already taking place through forums such as, the Council of the Great Lakes Region and the Annual Conference of New England Governors and Eastern Canadian Premiers. In an effort to expand economic relations and advance cross-border trade, U.S. ambassador to Canada Bruce Heyman has sent letters to the governors of all 50 U.S. states urging them to visit Canada. In the coming years, subnational governments will play a even greater role with respect to North American integration.

On October 5, 2015, negotiations concluded on the Trans-Pacific Partnership (TPP), which includes Australia, Brunei Darussalam, Canada, Chile, Japan, Malaysia, Mexico, New Zealand, Peru, Singapore, the U.S., and Vietnam. The massive Pacific Rim trade pact is scheduled to be formally signed on February 4 in New Zealand, but it will still need to be ratified by each of the member nations. Like other trade agreements that have come before it, the TPP will ultimately fail to deliver on the promise of economic growth and prosperity. The controversial deal poses significant threats to internet freedom, food safety, public health and the environment. It includes NAFTA-style investor rights that allows corporations to sue governments over decisions that may affect their future profits. The agreement contains thousands of pages of legal text and technical language, which covers a lot more than just trade. With the U.S., Canada and Mexico all a part of the TPP, it amounts to a complete renegotiation of NAFTA through the backdoor.

The TPP marks another step towards greater regional cooperation and integration. The U.S.-driven trade deal changes how member countries manage their economies and businesses. It sets the rules for a new global economic order, which would further erode national sovereignty. The TPP together with the Transatlantic Trade and Investment Partnership are part of plans to merge North America with Asia and Europe.

Dana Gabriel is an activist and independent researcher. He writes about trade, globalization, sovereignty, security, as well as other issues. Contact: This email address is being protected from spambots. You need JavaScript enabled to view it. Visit his blog at Be Your Own Leader