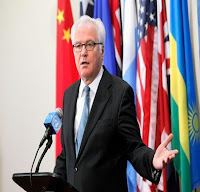 Washington and Ankara stand accused of violating international law by failing to notify the U.N. Security Council of the Islamic State group’s illegal oil activities.
Washington and Ankara have violated international law by failing to provide the United Nations Security Council with adequate information on the Islamic State group's illegal oil activities, RT reported Russia’s ambassador to the United Nations, Vitaly Churkin, to have said Monday morning.
Reminding his counterparts of U.N. Resolution 2199, which was introduced February 2015 as a countermeasure against the trade of “terrorist” groups operating in Iraq and Syria, Churkin pointed out that “countries are obliged to provide information” on the financial activities of the Islamic State group.

“That means the Americans had to provide such information, and of course Turkey, which should have reported any illegal trade going on there. They didn't do it,” Churkin told the RIA Novosti news agency.

“You've been flying there for a year, we've been there for two months and already provided many photos showing that oil is smuggled through the Turkish border,” Churkin told RIA Novosti.

“They must have known, and if they did, they should have reported it to the Security Council,” he continued.


Resolution 2199 was unaminously adopted Feb. 12, 2015, in order to prevent funding to the Islamic State group, al-Qaida and other militant groups operating inside Iraq and Syria. The resolution was also introduced in an attempt to put a stop to the Islamic State group’s illegal trade of oil, anqituities and hostages in both countries.
Churkin’s comments come as Russian-Turkish ties continue to deteriorate after the latter downed a Russian warplane on Nov. 24. Just days after the incident, Moscow imposed sanctions on Ankara, suspending flights while targeting imports and Turkish businesses. Russian Prime Minister Dmitry Medvedev has warned the downing of the jet was “reason for war.”
Tensions also escalated on Sunday, when a Russian warship was forced to fire warning shots at a Turkish vessel in the Aegean sea. The Russian Defense Ministry immediately summoned the Turkish military attache in Moscow, warning Ankara against such “reckless” behaviour.
The incident follows weeks of hostilities following the downing of the jet. In late November, Russian President Vladimir Putin ordered a build-up of 7,000 troops on the Turkish-Armenian border while a Russian warship equipped with a rocket launcher sailing through Istanbul on Dec. 8.

This content was originally published by teleSUR at the following address:

"http://www.telesurtv.net/english/news/US-amp-Turkey-complicit-in-ISIS-oil-smuggling---Russian-UN-envoy-20151214-0001.html". If you intend to use it, please cite the source and provide a link to the original article. www.teleSURtv.net/english