The Beluga’s Culture Shock: Seeing the world through the ‘Bubble’— musings from East Scotland
by Diane Walsh 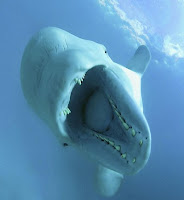 Culture shock is something usually associated with a human being feeling a sense of alienation or confusion when arriving in a place that is strange and new. It would be no surprise then, if difficulty in adapting cropped up as a culture-shock after-effect.

But what if the concept of culture-shock was applied to, say, placing the Beluga whitewhale in a ‘Bubble’ such as an Aquarium setting — whose ancestors had lived in the Ocean Wide for thousands of years?

Without falling into a debate about anthropomorphism, I would like to us to ‘problematize’ the idea of the ‘strangeness’ of having a huge Whitewhale in, arguably, a fishbowl.
www.worldwildlife.org

An Arctic and sub-Arctic cetacean, this Whitefish is also occasionally referred to, as the melonhead or sea canary.

I do not wish to be delving too deep into a discussion of Anthropology. If you would like to read more on the topic, ‘Beyond the Human’, Samantha Hurn (2012) researches the idea of animal exploitation, animal-rights theory and the anthropological implications of the evolving cultural ideas and concepts about animal personhood. She asks us to think about our own attitudes towards ‘other’ animals on earth (i.e. other-than-human) and relate this to what it might mean to be human. Perspectivism (e.g. Kohn; Descola; De Castro) asks us to take up seeing the world from the point of view of the ‘other’ in the natural world, while at the same acknowledging our thoughts as being, from a human standpoint (Key words; post-humanist, human exceptionalism).

With this all in mind, try and understand the example I have suggested, of ‘the foreignness’ of the fishbowl (Aquarium) from the perspective of the Beluga.

Granted we can never get into a cetacean’s mind, per se, but we can entertain the idea of ‘seeing the world from the perspective of the ‘Beluga’.

Here is an analogy. We’ve all likely observed the poverty and resignation of people who are on the wrong side of the ‘economic divide’. At times I have been there myself. What if this conceptualization of reality was applied to thinking about the Beluga? ‘Seeing’ the Beluga as being on the wrong side of the ‘divide’— whose fate is unlucky enough to have been captured — whose awesome and glorious natural-habitat nature/subjectivity modified into a mere object of money-making and gawk? Might I be able to force an argument that the Beluga is ‘ecologically impoverished’ i.e. trapped in a container?

Applying social theory to an understanding of the captive Beluga might actually prove useful. I could even push for a focus on the idea of ‘discrimination’ against Belugas. Why not? The fate of Beluga has been shown to be ‘poor’. We need to consider Maris’ recent death in Atlanta.

Keeping Belugas in captivity is really more about controlling the population in order to allow money to be made. It is about the circuits of capitalism reaching the Beluga as an object of profit. We don’t hear much of this phenomena at the moment but it underlies much of what is happening. If a Beluga dies, it is always ‘a complete mystery’. Whether it’s Vancouver or Atlanta.

On October 24, 2015, I read, while in Scotland, that “Maris the beluga whale dies suddenly at Georgia Aquarium [emphasis mine] (Source: Faith Karimi, CNN).

It’s well known that Maris had given birth to two babies, both of whom died. The first baby died in 2012 only days after birth, and the second, after less than a month. There are two Belugas left at the Georgia Aquarium – Grayson and Qinu.

Karimi, the reporter from CNN, obtained this quote from PETA (People for the Ethical Treatment of Animals). “Maris was denied her freedom her entire life. She was transferred from one facility to another, and her babies died, one after the other. Whether or not she had a physical ailment that went unnoticed, she was killed by captivity, plain and simple.”— PETA senior vice president Lisa Lange.

Okay, we know the drill. Aquariums argue that belugas in captivity (modified, with the phrase ‘belugas in human care’) enable scientists to better comprehend them in the wild. Latest ‘ethical’ research, needless to say, focuses on how ‘underwater sounds’ affect belugas — including the human-created noise-pollution created by industrial or military activity? The Aquarium is a lab, effectively. Biologists from respected universities are involved in this project and do not have to wrestle with any sort of conundrum relating to ethics. It is taken as a given that this is, ‘good’ research – no questions asked.

Karimi continues to explain that “The data can be combined and applied to help conserve and protect wild belugas from threats in their natural habitats”, according to the Georgia Aquarium website.

It’s clear that the Georgia Aquarium has been very careful to maintain the position that Maris, 21, “showed no signs of illness before her death. She ate and interacted normally with Grayson and Qinu, the other two beluga whales at the aquarium.This is a case of sudden, acute animal death. Our animals receive exceptional care, and our dedicated team of experts responded to her within minutes to render aid.”— Dr. Gregory Bossart, Chief Veterinarian at the Georgia Aquarium.

All the public is told is: “An autopsy is underway”.

What is curious is that only recently we heard of one Beluga death and then another at Vancouver Aquarium in Canada. It would not have been difficult to put a sentence about that. The second one was said to have been due to pneumonia.

Care2care.com reports “In 2012, the aquarium filed a controversial petition to bring 18 wild-caught belugas here from Russia who would be split up at different facilities under breeding and loan agreements. Unfortunately for those supporting the effort, in September a federal judge shut down the effort”. We’re told there’s pressure on “The National Marine Fisheries Service to declare the population of belugas, suffering from captures in Russia, as depleted, under the Marine Mammal Protection Act”.

In the context of another published CNN news article, “SeaWorld can expand its tank but not breed whales, board rules” all eyes are likely now focused on the Georgia Aquarium’s desire to ‘grow’ belugas.

I have reflected briefly on ‘animal/human’ interaction and the assumptions humans make when beginning to use models of observation. I have asked that readers reconsider the idea of Belugas in labs. I suggest here, that there may be a benefit in actually applying human social theory to the fate of the captive Beluga.

I will leave you with this final thought.The light/colour/frequency spectrum experienced by humans, that, compared with the receptors that cetaceans/animals/birds experience, confines us to a uniquely human world. We can never enter the complete experiential world that enables the ‘others’ in the animal kingdoms and the seas, to exist on the same planet. Technology will never enable us to ‘see’ the colours/frequencies that non-humans experience – not even with Hubble style magnification. To that extent we should understand an inherent disability — so is this the anthropological blind leading the blind?

If we see that our ways of seeing are blind to the ways that the Beluga sees — just one ‘animal’ example — we might be able to better understand their deaths in the aquarium setting. To understand if the Beluga and the baby beluga experiences culture-shock in the Aquarium fishbowl, the ‘Bubble’ must first be burst.