Former Guantánamo Prisoner Omar Khadr Asks for Bail Conditions to be Eased So He Can Visit His Family
by Andy Worthington
8.9.15 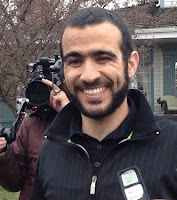 Former Guantanamo prisoner Omar Khadr speaking to the media after his release from prison on bail on May 7, 2015. Photo made available by Michelle Shephard of the Toronto Star on Twitter.The former Guantánamo prisoner Omar Khadr, who was freed on bail in May, after spending two years and eight months in Canadian prisons (and nearly ten years in Guantánamo), has asked a Canadian court to ease his bail conditions, so he can fly to Toronto to visit his family, attend a night course at the Northern Alberta Institute of Technology (NAIT), and get to early morning prayers.
As the Canadian Press described it, he was granted bail “pending his appeal in the US against his 2010 conviction for war crimes by a widely discredited military commission at Guantánamo Bay” — “widely discredited” being something of an understatement.
Although no one has ever disputed the fact that Omar was a model prisoner, and has not been in any trouble since being freed from prison and allowed to live with his lawyer Dennis Edney and his wife, the bail conditions are harsh. As the Canadian Press described it, he is “required to communicate with his family … only in English and under the Edneys’ supervision,” and is not allowed to leave Alberta, except to stay at Edney’s vacation home in British Columbia.
He also has to wear an electronic tag, on his ankle, which, in a supporting affidavit, he called “uncomfortable,” adding, “It has also gone off several times and made noise all the time, even when I am in full compliance with my conditions. This can be particularly embarrassing.” The Edmonton Journal added that he complained that his electronic tag “hinders his full integration into the community,” and also noted that the bail conditions restrict his computer use, but he would “like to use computers in Edmonton public libraries.”
In the affidavit, Omar also stated, “My release and reintegration into the community have been going great. I have been embraced by many members of the community and made many new friends.” The Edmonton Journal noted that, in his affidavit, he also expressed “optimism about his summer activities reintegrating into Edmonton — cycling, meeting friends, connecting with a mosque, continuing his high school studies and preparing for university.”
As the Canadian Press described it, “Khadr’s maternal grandparents live in Toronto. He says his grandmother is ill and his grandfather barely speaks English. As a result, he says, he wants to be able to visit them and converse in another language without the Edneys present.” He also “says he wants to see his mother, siblings, and other relatives during a two-week visit to Toronto, either this month or next.”
In his affidavit, Omar stated, “I am now an adult and I think independently. Even if the members of my family were to wish to influence my religious or other views, they would not be able to control or influence me in any negative manner.” He added, however, “None of my family members are involved in any illegal activity.”
As the Edmonton Journal described his other reasons for asking for hs bail conditions to be relaxed, “Khadr must be home between 10 p.m. and 7 a.m. — that does not give him enough time to get home from his 7 p.m. to 10 p.m. night course at NAIT to train as an emergency medical responder. Under the curfew, he can’t go for early bike rides or make overnight visits to his new friends in Canmore [and] Lac La Biche,” as well as his family in Toronto.
The Canadian Press also noted that there had been no immediate response from the government regarding Omar’s application to the court, which is expected to hear the case on September 11. The government still maintains that Omar should not have been released on bail, and is appealing the decision, although “it has yet to request a date or file supporting documents.”
The Canadian Press also noted that, “despite the government’s objections, the Supreme Court of Canada ruled the eight-year sentence the [military] commission gave Khadr as part of his plea bargain amounts to a youth sentence,” which “means he would have been eligible for statutory release Aug. 19, according to Correctional Service Canada.”
Nate Whitling, another of Omar’s lawyers, wrote in the application, “The original conditions are no longer necessary or in the public interest,” and US military psychiatrist Stephen Xenakis, who has “spent many hours with Khadr including a visit this summer, sent a letter in support,” as the Edmonton Journal described it, in which he stated that Omar is a “fully alert, oriented co-operative young man,” who has “publicly denounced violence.”

Note: See below for the trailer, on YouTube, for “Guantánamo’s Child,” directed by Patrick Reed and Michelle Shephard, which has its world premiere at the Toronto International Film Festival on Sept. 14 at the Isabel Bader Theatre.


Andy Worthington is a freelance investigative journalist, activist, author, photographer, film-maker and singer-songwriter (the lead singer and main songwriter for the London-based band The Four Fathers, whose debut album, ‘Love and War,’ was released in July 2015). He is the co-founder of the Close Guantánamo campaign, the co-director of We Stand With Shaker, calling for the immediate release from Guantánamo of Shaker Aamer, the last British resident in the prison, and the author of The Guantánamo Files: The Stories of the 774 Detainees in America’s Illegal Prison (published by Pluto Press, distributed by the University of Chicago Press in the US, and available from Amazon, including a Kindle edition — click on the following for the US and the UK) and of two other books: Stonehenge: Celebration and Subversion and The Battle of the Beanfield. He is also the co-director (with Polly Nash) of the documentary film, “Outside the Law: Stories from Guantánamo” (available on DVD here — or here for the US).


To receive new articles in your inbox, please subscribe to Andy’s RSS feed — and he can also be found on Facebook (and here), Twitter, Flickr and YouTube. Also see the six-part definitive Guantánamo prisoner list, and The Complete Guantánamo Files, an ongoing, 70-part, million-word series drawing on files released by WikiLeaks in April 2011. Also see the definitive Guantánamo habeas list, the full military commissions list, and the chronological list of all Andy’s articles.
Please also consider joining the Close Guantánamo campaign, and, if you appreciate Andy’s work, feel free to make a donation.