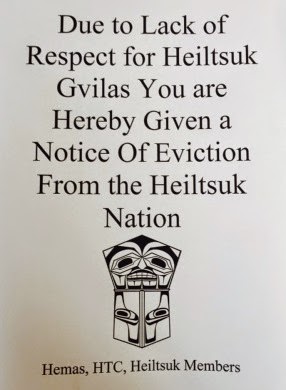 Tensions continue to escalate on the waters of the Great Bear Rainforest over a highly controversial herring fishery, as members of the Heiltsuk Nation are now occupying the local DFO office in opposition to a planned gillnet opening.
A group of Heiltsuk youth, elders and chiefs paddled and boated this afternoon from Bella Bella to the coast guard station on nearby Denny Island – headquarters of DFO’s central coast operations – to deliver an eviction notice reminding local representatives that Area 7 is a no-go zone for a commercial herring fishery this year.
The delegation stripped DFO of a ceremonial paddle which had been given to local officers before in good faith.
“You cannot have that,” youth leader Saul Brown told DFO representatives, “because you’re not here in a good way anymore.”

“You’re not conducting yourselves in a way that is sustainable for our future generations, so this is our children and youth saying, ‘We’re going to take that paddle back.'”

“DFO has forced us into a collision course with industry,” Chair of the Heiltsuk Economic Development Corporation Frank Brown explained over the phone from the occupied DFO office.

If they allow gillnets into Area 7, they’re basically condoning a physical confrontation. 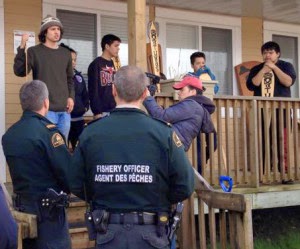 Heiltsuk youth leader Saul Brown takes back a ceremonial
paddle from DFO officers (Colin Jones/facebook)
Today’s conflict follows a week of high tensions between the First Nation and DFO over the controversial herring fishery. Last Sunday, DFO angered the Heiltsuk by opening a seine fishery amid depleted herring stocks in Area 7 without informing them.
A Thursday press release from the nation vowed to stop a gillnet fishery “by any means necessary” after DFO refused to close the door to a subsequent gillnet fishery during talks with Heiltsuk leaders in Vancouver Wednesday.
The Heiltsuk have declared Area 7 a no-go zone to a commercial herring fishery due to concerns over the health of local stocks and allegations of flawed science by veteran scientists – including retired DFO herring specialist Dr. Ron Tanasichuk, who notes:

The forecasting methodology that DFO uses now for central coast herring is actually quite flawed…DFO’s forecasts are likely twice as much as they should be.


With DFO digging in its heels, a gillnet opening could come within the next day, in which case, “We will escalate from occupying the station to being out on the herring grounds,” said Frank Brown.

“We’ve done everything we can. We have to hold strong.”

Damien Gillis is a Vancouver-based documentary filmmaker with a focus on environmental and social justice issues - especially relating to water, energy, and saving Canada's wild salmon - working with many environmental organizations in BC and around the world. He is the co-founder, along with Rafe Mair, of The Common Sense Canadian, and a board member of both the BC Environmental Network and the Haig-Brown Institute.