How beautiful is São Paulo? Beyond the carnival
by Michelle Arroyo Fonseca 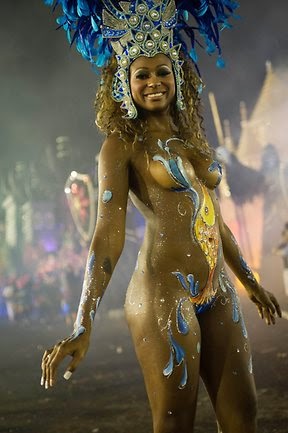 Last February I travelled to São Paulo to assist a women-led environmental funds meeting. My first time in Brazil, I see the lush vegetation surrounding the airport. The green space awakens and inspires me after a long trying flight.
"How beautiful is São Paulo! Please forgive me if I look astounded", I say to my colleague Cristina.

"Rio (de Janeiro) is better than São Paulo", she answers.

"Really? Okay, I like this a lot, but you're Brazilian, Cristina".
My impression were soon changed, over the following days I spent in Cunha. When I heard the people's stories, another side of Brazil began to emerge, that does not appear in the Mexican media.

The images of happiness from Rio's Carnival or the Favelas is not the complete story, something I did not fully comprehend, at first glance. Under the surface, is a story about marginalization of local people, and ever encroaching industrial agendas.
My colleague, Cristina, from Fundo Socioambiental CASA, adds to this concerning emerging narrative. That the Brazilian city of São Paulo, which is home to 20 million people, is suffering the worst hit by drought in its history. In November 2014, the Folha de S. Paulo, a local newspaper, reported that drought had reached at least 133 cities and is affecting 27.6 million people who encompass 23% of the Brazilian GDP. Of its 645 municipalities, 92 (14%) are facing some kind of water emergency.
Although it is difficult to estimate how economy is affected by water crisis, companies are reporting losses. The Brazilian Sugarcane Industry Association (UNICA) has projected a decrease of 2.9% in sugarcane production, lower than the 2014/2015 harvest in the center-south of the country.
The Guardian reported that at least six cities have been hit by blackouts due to weak hydroelectricity generation.
February, as a midsummer month, has strong waves of heat which causes people to consume more water. There's high demand for air conditioning as temperatures soar over 35°C. As a consequence inhabitants of Sao Paulo are burning more fossil fuels, adding to greenhouse gas emissions. It's no surprise then, that "the less energy, less water" advise is hard to implement, particularly in the big cities.
Also concerning is the lack of or incomplete newspaper-coverage of industrial accidents. For instance, on Wednesday, February 11, 2015 at 12:50 am, an explosion occurred on Floating Production Storage and Offloading (FPSO) unit “Cidade de São Mateus” operated for Petrobras by BW Offshore in Espirito Santo littoral, 120 km from the coast.
Petrobras did not have any press release. However BW Offshore confirmed that while two crew members remain in hospital, the total number of fatalities stands at 9, with 25 people, hurt.
The grave news did not come as a surprise to the environmentalists. The Brazilian forest has long been suffering massive and noxious clear-cutting campaigns, for infrastructure development, logging, mining, ranching, and soya farming and so on.
On 2012 Brazilian Amazon deforestation was just 1,765 square miles. But over the past couple of years, deforestation has been on the rise again. In 2013 clear-cutting in the Amazon was up by 30 percent over the 2012 numbers.
Further increasing investments to promote infrastructure development, is never far off. According to Dilma Rousseff's government (and other governments who concur in Latin America), the extractive industry is what will bring progress! What better target for the people! Championing the motto, “order and progress”, provides common rhetoric for promoting industry proliferation.
In 2013, Brazilian environmental law had to contend with the adoption of the new forest code, seen by environmentalists, to be a serious setback for the protection of forests and water. The Proposed Constitutional Amendment (PEC-125) dramatically changes the demarcation of indigenous lands, from the executive to the legislature. As if this was not enough, the PEC-215 allows mining in indigenous territories.
President Rousseff is already plunging in popularity due to public perception of her role in the Petrobras scandal.
Unemployment, water shortages and a stagnating economy, and in addition, the massive corruption schemes underlying the Accelerated Growth Program (PAC), have seriously undermined her and her party credibility.
All this said; I have tried to change my negative perspective. I traveled to Brazil to facilitate a critically important meeting. Six funds; The South America Women’s Funds: Elas; Urgent Action Fund Latin America; FondoMujeres del Sur; Alquimia; FondoLunaria and Fundo Socioambiental CASA met together to support the women defenders working on environmental justice in Latin America. In enhancing our capacity to implement regional strategies within a sustainable activism framework, the issue of women environmental defenders facing increasing risk related to their activism, was able to be highlighted.
This is huge and I am part of it! I share here the questions which come to mind: How erroneous was my initial “tourist” image of Brazil? What is the image that Brazilian women have of themselves, as women most affected, by environmental events?
In 2012, the United Nations Environment Programme (UNEP) launched “Gisele Bündchen experiences energy-poverty in Africa” where the Brazilian supermodel showed Kenyan women walk miles to carry firewood and water at home. Bündchen, a privileged Brazilian, left the catwalk for a few days to experience the reality of energy-poverty to see how Kenyans are transforming their lives by accessing sustainable energy.
As shown in the video, the vulnerability of African women is urgent. However, the situation of Brazilian women is; too.
So, where is the media to disseminate the disasters that are facing women in the Amazon? Where are the international organizations defending prevailing causes such as the differential impacts of climate change on women and children? Where are the supermodels talking about the irreparable damage that new environmental laws have made to the Amazon? All of these questions remain unanswered while BBC News reported that hundreds of thousands of Brazilians have joined demonstrations against President Dilma Rousseff, with many asking for her impeachment.
And indeed, as my plane took off I realized that Río is better than São Paulo. At least they have the happy carnival.