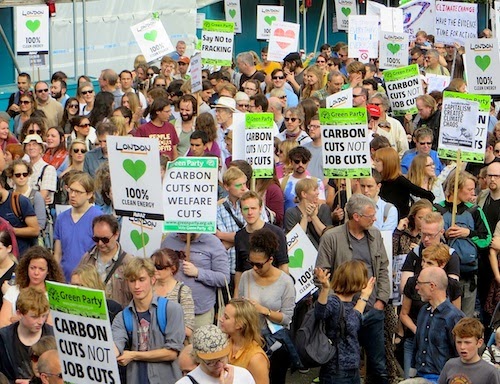 In September 21, 2014, all around the world, hundreds of thousands of people in 166 countries took part in over 2,800 events calling for urgent, coordinated action on climate change.

The website for the New York City event — attended by an estimated 300,000 people — described it accurately as the “largest climate march in history.”

The trigger for the coordinated events around the world was the Climate Summit taking place at the United Nations headquarters in New York on Tuesday, where over 120 world leaders “will try to rally the political will for a new world-wide climate treaty by the end of 2015,” as the Wall Street Journal described it.

See my photos of the People’s Climate March on Flickr here.
I attended the event in London, which involved around 40,000 people, a largely sunny day and a very friendly atmosphere, and took the photos available on Flickr. It was a powerful demonstration of widespread concern about the climate that is an important antidote to the cynical and well-funded climate change denial lobby, and the general indifference of politicians, who sometimes make positive noises about the environment, but are more generally in bed with the polluters — and, in addition, find themselves unable to tell the truth to their electorates: that we urgently need to make the environment a priority, and that doing so has to involve curbing our own destructive appetites.

Note: See the Guardian‘s report on events around the world here, and see here for an interview in the New Yorker with the journalist and environmental activist Bill McKibben, one of the main organisers of the march. Also see the Guardian review of Naomi Klein’s new book, This Changes Everything: Capitalism vs the Climate, and an interview with Klein here.

Andy Worthington is a freelance investigative journalist, activist, author, photographer and film-maker. He is the co-founder of the “Close Guantánamo” campaign, and the author of The Guantánamo Files: The Stories of the 774 Detainees in America’s Illegal Prison (published by Pluto Press, distributed by Macmillan in the US, and available from Amazon — click on the following for the US and the UK) and of two other books: Stonehenge: Celebration and Subversion and The Battle of the Beanfield. He is also the co-director (with Polly Nash) of the documentary film, “Outside the Law: Stories from Guantánamo” (available on DVD here – or here for the US).

Please also consider joining the “Close Guantánamo” campaign, and, if you appreciate Andy’s work, feel free to make a donation.