Gaza, Ukraine and US preparations for urban warfare
by Bill Van Auken - WSWS 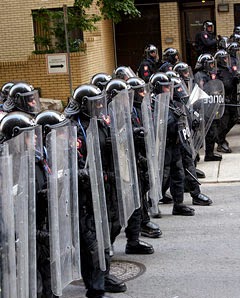 For more than a month, the world has watched in horror as the Israeli military has pounded the densely populated and impoverished territory of Gaza with bombs, missiles and shells, while deploying tens of thousands of troops against a trapped population.

This sustained onslaught has killed nearly 2,000, wounded over 10,000 more and left nearly half a million people displaced by the massive destruction of homes and basic infrastructure.

While receiving far less media coverage, similar atrocities are unfolding in eastern Ukraine, where the US-backed Kiev regime has launched its military, with key support from autonomous fascist militias, in a savage siege of the major cities of Donetsk and Luhansk.
"Policing" the G20 - Toronto 2010
The death toll there has doubled in the last two weeks, pegged by Wednesday’s exceedingly conservative United Nations estimate at 2,086, with at least 5,000 more confirmed wounded.

Here too hundreds of thousands have been forced to flee their homes in what is emerging as a deliberate campaign of ethnic cleansing by the right-wing nationalists in Kiev. And, as in Gaza, hospitals and schools have been shelled, killing patients and children.

Images from both Gaza and Ukraine of the lifeless and maimed bodies of children, of older men and women weeping beside the ruins of homes and apartment blocks, and of innocent men and women cut down by shrapnel while leaving their homes or going to find food or water for their families, have shocked and appalled working people all over the globe.

In other quarters, however, these events are being closely watched with dispassionate and professional interest.

This is the case in the offices of senior political and military figures in Berlin and other European capitals, which have backed the Kiev regime’s “anti-terrorist” campaign against the population of eastern Ukraine.

The governments of Europe have remained silent even as the media has been forced to admit that virtually the entire ground offensive in this war of repression is being carried out by far right and neo-Nazi militias. These include the Azov Battalion, which, as the Sunday Times of London notes “has as its symbol the wolf’s hook that was used by Nazi storm troopers and is now banned in Germany.”

By their own admission, these fascist militias have attracted neo-Nazi and white supremacist recruits from a number of other countries, including Sweden, Italy, France, Canada and Greece. While there has been a hue and cry about the alleged danger of European Islamists going to fight in Syria and then returning to Europe, no such concerns have been raised about those gaining combat experience in eastern Ukraine. Under conditions of rising social tensions on the continent, there is undoubtedly among some layers of Europe’s ruling elite a feeling that battle-hardened fascist thugs may prove useful in the not too distant future.

The closest attention to the events in Gaza and Ukraine, however, is being paid by the Pentagon, which is up to its elbows in blood in both of these wars. The US military has the closest relations with the Israel Defense Forces, which Washington funds to the tune of $3 billion annually.

The Pentagon recently asked Congress for another $19 million—on top of $23 million already allocated—to train and equip Ukrainian National Guard units. In the midst of the “anti-terror” offensive in the east of the country, the US military last month rushed a team of specialists in “strategy and policy” to Kiev to evaluate this bloody campaign.

Both of these conflicts provide real-life laboratories for what is increasingly a top priority of the Pentagon—the preparation of US forces for urban warfare.

As far as Israel goes, this is nothing new. In 2001, the US built an Urban Warfare Training facility for the IDF in the Negev desert at the cost of $266 million. The 7.4-square-mile simulated city is used for joint training exercises involving Israeli and US special forces units, who share techniques that they have learned, respectively, in Gaza, the West Bank and Lebanon, and in Afghanistan and Iraq.

In Donetsk and Luhansk, the Pentagon is overseeing something that it views with even greater interest—a full-scale siege of a modern city and a center of the industrial working class of over a million people.

Combat in large cities is central to the military doctrine that is being developed by the US armed forces. This is spelled out in a document entitled “Megacities and the United States Army: Preparing for a complex and uncertain future,” which was released in June by the Army’s Strategic Studies Group and endorsed by its chief of staff, Gen. Raymond Odierno.

Predicting that it is “highly likely that megacities [described as metropolitan areas with populations of more than 10 million] will be the strategic key terrain in any future crisis that requires U.S. military intervention,” the report reveals that the Pentagon has conducted “case studies” and “field work” in preparation for such interventions in: Dhaka, Bangladesh; Lagos, Nigeria; Bangkok, Thailand; Mexico City, Mexico, Rio de Janeiro and Sao Paulo, Brazil … and New York City.

Describing the conditions that it anticipates will require US military intervention, the report warns, “As inequality between rich and poor increases … Stagnation will coexist with unprecedented development, as slums and shanty towns rapidly expand alongside modern high-rises. This is the urban future.”

“Radical income disparity,” is further described as the foremost “driver of instability” in these far-flung urban areas.

In other words, the Pentagon brass is seeking to prepare the US military for directly counterrevolutionary interventions aimed at quelling popular revolts that it sees as the inevitable consequence of the unprecedented social inequality created by world capitalism in crisis.

The inclusion of New York City in its “case studies” serves to make explicit that these preparations are directed at revolutionary developments not only in Africa, Asia, the Middle East or Latin America, but most critically within the United States itself.

This goal of preparing the US military to suppress popular rebellion inside the US has also been pursued with a series of provocative “urban warfare training” exercises conducted in major US cities in recent years. There was also the opening earlier this year in Virginia of a US Army Asymmetric Warfare Group training center that consists of a mock American town, replete with office buildings, a church, a sports stadium, a subway stop and a train station. The Army said that the $96 million center is designed to realistically “replicate complex operational environments and develop solutions.”

The Pentagon’s preparations go hand-in-hand with the militarization of supposedly civilian police forces, which are almost universally outfitted with SWAT (Special Weapons and Tactics) squads armed to the teeth for modern warfare, like those deployed against St. Louis residents protesting the police murder of Michael Brown.

The slaughter in Gaza and Ukraine represents a warning to the working class in the US and all over the world. The same financial and corporate oligarchy that supports these wars is prepared to employ murderous violence to defend its system against a revolutionary challenge from the working class.

It is clear that the ruling classes and their military commands are getting ready for such an eventuality. The working class must prepare itself accordingly.