"B.C.'s salmon farming industry is on high alert after the discovery of a lethal fish virus at one farm on the west coast of Vancouver Island," reported CBC News (17 May).
"The Canadian Food Inspection Agency has quarantined the farm at Dixon Bay, north of Tofino. Mainstream Canada, which runs the operation, says it will destroy its entire stock of 560,000 one-kilo-sized salmon, to prevent the disease from spreading."
According to Reuters (16th May): "This information is subject of the disclosure requirements pursuant to section 5-12 of the Norwegian Securities Trading Act"

"This is code red," said Laurie Jensen representing the Norwegian-owned company Cermaq (owners of Mainstream Canada). "So we are just going to depopulate. 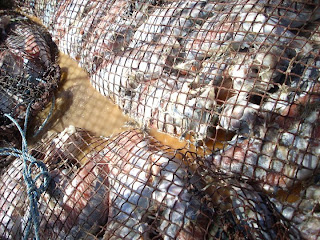 We will lose money. It's in the millions."
“Between August 2001 and June 2003, 36 Atlantic salmon farms in BC contracted IHNV," stated the paper.  "This constituted over 50% of all Atlantic salmon seawater farms in the province. Over 12 million farmed Atlantic salmon died or were culled as a result of the epidemic.”
Read in full online here

The Canadian Press reported (18 May) that the disease is potentially spreading throughout British Columbia: "Atlantic salmon farms around Vancouver Island have begun testing and formed a special outbreak management team after a virus outbreak at one farm led to a site quarantine and the cull of more than half a million fish."

"A second farm announced Friday afternoon that the federal Department of Fisheries and Oceans has identified a "low positive result" for the same virus in coho salmon samples on a Sunshine Coast farm," continued The Canadian Press.  "Grieg Seafood said further tests will be conducted next week." 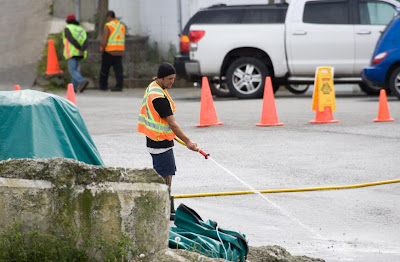 Visitors to Cermaq's Canadian operations in Clayoquot Sound were greeted (17 May) by a 'Stop' sign and ordered to follow biosecurity protocols including disinfection of tires and shoes. 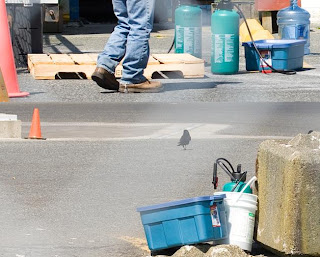 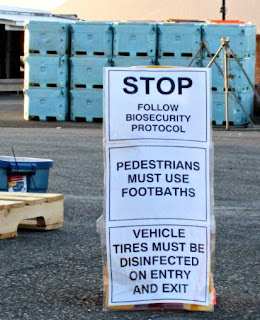 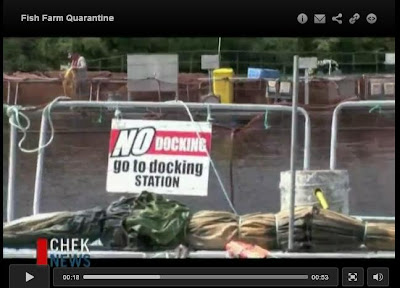 The broadcast features Cermaq's PR flak in Canada, Laurie Jensen, who claims that IHN is not a problem. 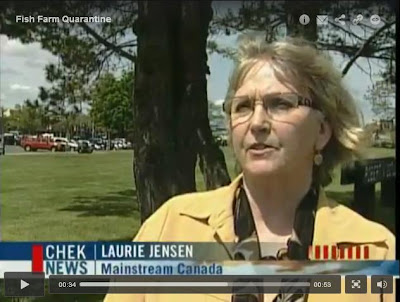 Last year, Laurie Jensen also claimed during a public meeting in Tofino that ISA was an "East coast disease" (before ISA was reported at a salmon farm in Clayoquot Sound on the West coast of Canada).  Jensen compared maintaining fish health in feed lot sized fish farms was "like growing carrots" or removing "sick kids in a daycare." 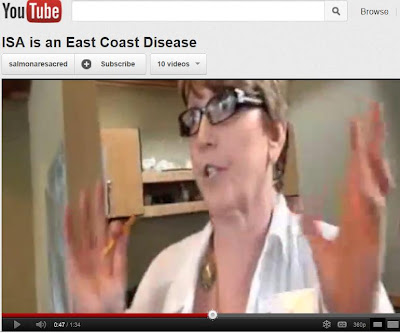 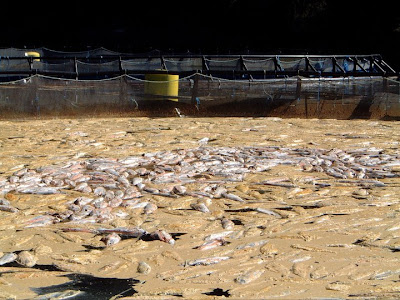 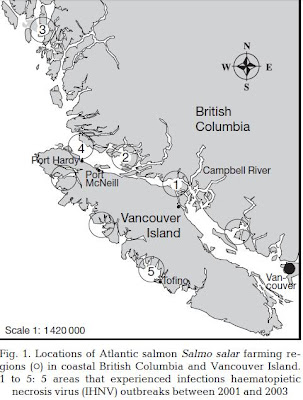 The BC Salmon Farmers Association (BCSFA) already have a 'Finfish Kill Contingency Plan' (2008) in place to deal with the mort mountain.


“Vessels from farms designated as infected or quarantined due to infectious disease concerns need to use planned travel routes to minimize the probability of spread of disease agents to unaffected farms,” states the report.  “Upon completion of recovery, transport and disposal, pumps, hoses, vessel holds and trucking containers will be decontaminated with a suitable solution to prevent further spread of pathogens, parasites, or chemical contamination.”
Read more via "British Columbia Finfish Aquaculture Waste Tissue/Finfish Kill Contingency Plan"

In 2010, a 'Mass Mortality Disposal Workshop' addressed the issue of an 'Industry Viral Disease Management Plan'.  According to the BC Ministry of Environment:

“Based on the previous two IHNV epizootics it is accepted that farming practices contributed significantly to IHNV spread between farms and areas (Saksida, 2006). Waterborne transmission played a role in the spread of IHNV between farms in close proximity (Saksida 2006, McClure 2007). Retrospective investigations suggest that rapid culling of the index case may have significantly limited or even eliminated IHNV spread. Estimated loss was 11000mt in 2002 due to IHN (Golder & Associates 2008).” 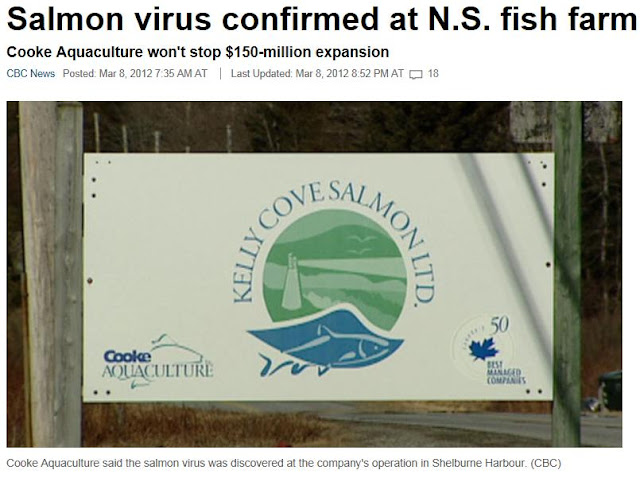 "It's just another nail possibly in the coffin," said Lewis Hinks of the Atlantic Salmon Federation. "It causes us great concern no matter how you look at it."

The Canadian Press reported in April that: "The Canadian Food Inspection Agency ordered Cooke Aquaculture to kill and dispose all of its salmon at a fish farm in Shelburne Harbour, the same site where infectious salmon anemia was detected in February during routine testing."

Susanna Fuller, a marine co-ordinator at the Ecology Action Centre, said the spread of the disease illustrates the dangers of the farmed fish sector. "The outbreak brings home very close to home the risks of this industry," she said in an interview. "This is the kind of thing that happens when we have a high density of fish being farmed in a small area."

The Chronicle Herald reported (26 April): "Several hundred thousand salmon must be destroyed due to an outbreak of a virus at a fish farm outside Shelburne Harbour. The farm, which is owned by New Brunswick’s Cooke Aquaculture, has been under quarantine after infectious salmon anemia was discovered there during routine testing in February."

Since the Canadian Food Inspection Agency ordered the fish kill, the federal government will compensate Cooke for some of its cost. At least one conservationist was angered by the news that taxpayers will foot some of the bill for the disease outbreak.

“Besides the significant risk of spreading this deadly virus to struggling populations of wild Atlantic salmon in our South Shore rivers, it is simply outrageous that Canadian taxpayers will now have to compensate the company for the aquaculture crop fish they’ve lost due to their own poor practices,” said Raymond Plourde, the Ecology Action Centre’s wilderness co-ordinator.

"Despite the concern in some circles about the recent outbreak of infectious salmon anaemia (ISA) at Cooke Aquaculture’s McNutt’s Island farm in Shelburne resulting in the destruction of 100,000-plus fish from four large cages and the strict quarantine of the remaining 20 cages, the New-Brunswick-based aquaculture corporation is likely in the near future to be selling ISA-affected fish through their normal consumer channels, according to federal officials," reported South Coast Today (16 April).

Asked if consumers would be notified about any ISA virus contained in farmed salmon, the Canadian Food Inspection Agency said that “There would be no special labeling requirements,” because of the lack of “human health or food safety risk” connected with ISA.

In British Columbia, farmed Atlantic salmon bought in supermarkets in Vancouver also tested positive for ISA.  "There is strong evidence this virus is European strain," wrote Alexandra Morton in March.

In April, Alexandra Morton reported 44 out of 45 farm salmon purchased from the Superstore and T&T markets throughout Vancouver tested positive for a newly identified Norwegian virus. The piscine reovirus weakens the fish’s heart causing Heart and Skeletal Muscle Inflammation (HSMI). 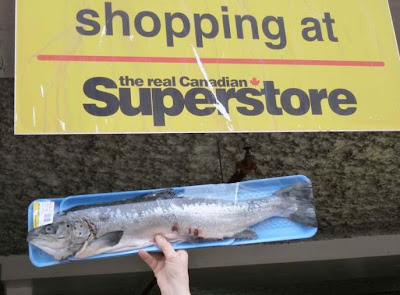 Read more via "New Norwegian Virus in Supermarket Farm Salmon"
In December 2011, The Ecologist reported on ISA spreading to British Columbia under the headline  "Warning as infectious salmon disease spreads from Europe's fish farms to Canada".   During Canada's salmon inquiry (the 'Cohen Commission') it was revealed that both ISA and HSMI had been detected on salmon farms in British Columbia.

“The news that these viruses are here in the Clayoquot Sound UNESCO Biosphere Reserve is chilling” said Bonny Glambeck of Friends of Clayoquot Sound.  “This virus puts at risk not only the wild salmon, but the ancient rainforest for which this region is renowned.”

For more background on ISA in British Columbia read "Clayoquot Under Virus Attack!"